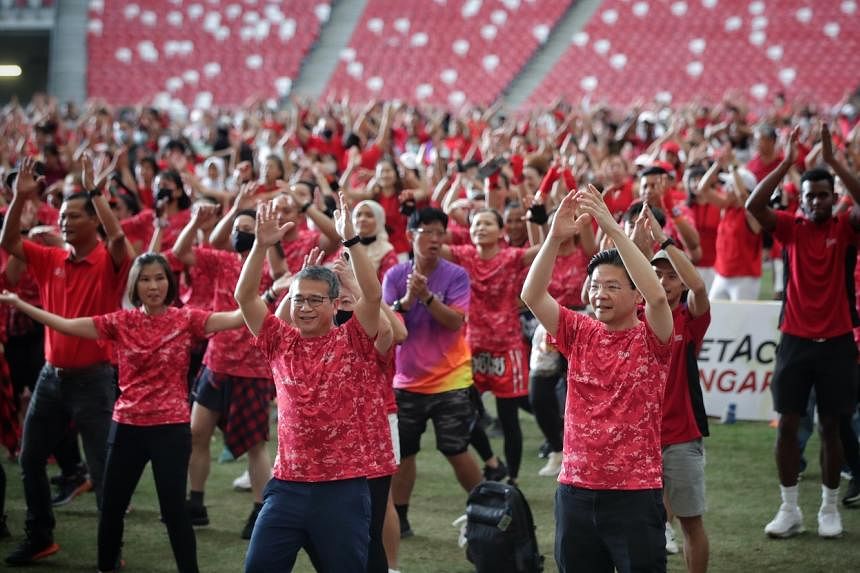 The fitness enthusiasts who stayed at the National Stadium were led by 60 instructors when they entered the Singapore Book of Records for the biggest mass, combat and KPopX fitness workouts.

Roy Teo, Group Head of Industrial Developments and Special Projects at Sport Singapore, said: “It was a wonderful sight to see so many people coming together to exercise and celebrate our nation’s birthday.”

Mass Training follows the government’s commitment to make the Sports Hub more accessible to Singaporeans through grassroots and community-based sporting and lifestyle events.

One participant, Pat Neo, who is in her “late 50s”, said: “Having the chance to train with other Singaporeans inside the National Stadium is very special.”

Those in OCBC Square, who generally belonged to a younger population, also appreciated the opportunity to strut their stuff.

Koh Chen Pin, a veteran of the local parkour scene, said, “We fought against the stigma of parkour as being dangerous or reckless.

“Having an event here legitimizes our sport, shows that it’s accessible and that the government recognizes that and…hopefully we can continue to promote it in a positive light.”

The 28-year-old, who has been doing parkour for 15 years, said athletes usually train in public buildings, including housing blocks and noted that “Singapore’s architecture is almost built for parkour “.

Skateboarder Janiel Irishzan, 21, also enjoyed having the spotlight on his sport, with onlookers from the balcony of the Kallang Wave Mall watching him and other skaters perform their moves.

The Republic Polytechnic engineering student, who usually skates on the East Coast or in Somerset, said: “I’m very excited. It’s very nice to have everyone cheering for you in the sport you like to practice.”

Abandoned Olympic venues can be left in the past