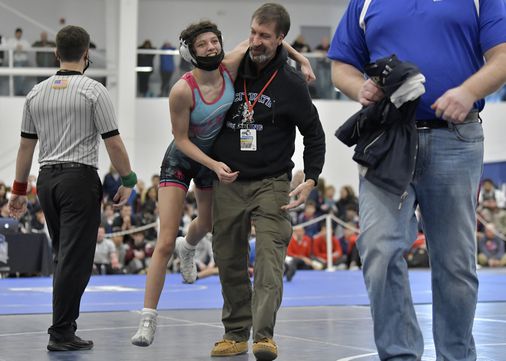 Wrestler Sara McLaughlin hasn’t started at Scituate High yet, but she’s already one of the school’s biggest stars

At 13 years old, Sara McLaughlin is the first All-American athlete at Scituate High, and she has yet to take any classes at school.

McLaughlin enters his first year as a sailor with a resume that makes senior graduates jealous. As the first eighth grader to join varsity wrestling team Scituate, she went 19-4 against the boys in the regular season and then won a MIAA Women’s State Championship at 100 pounds, winning all of her matches by pin without yielding a single point.

But that was just the beginning. The previous week, she won the Massachusetts Wrestling Association’s New England Championship. A few weeks later, she went to the NHSCA Championship in Virginia Beach, where she became an All-American with a seventh-place finish.

The latest sports headlines from The Globe delivered to your inbox every morning.

As June arrived, she was walking the carpet with AC/DC’s Thunderstruck – her favorite release music – in Madison Square Garden during an exhibition match as part of Final X, an event hosted by USA Wrestling. . As other grapplers battled for coveted spots on the United States World Senior Team, McLaughlin landed the fastest pin (42 seconds) of the day.

McLaughlin came to wrestling through her family. His father, brian – who works in financial consultancy and has his captain’s license – led the wrestling team at Medford before it disbanded. His mother, Lauragrew up in Bradford and was a professional modern dancer in London, Los Angeles and San Francisco.

But his origin story starts with his little brother, Connorwho was wrestling at a youth training in Hingham when Brian spotted a girl who didn’t have a partner.

“My father asked me if I would be his partner,” she recalls.

Unbeknownst to everyone involved, a wrestling career was born at this time.

“I did a lot of sports: soccer, figure skating, softball,” McLaughlin said. “I didn’t love any of them as much as I love wrestling.”

“At first, I wasn’t the best wrestler,” she said. “I lost a lot of games. It’s more fun when you win and I wanted to have more fun, so I knew I had to work harder.

McLaughlin began attending four or five wrestling practices a week. She spends hours in her garden climbing rope to get stronger.

King, who also coaches with Riptide, was so encouraged by what he saw of McLaughlin that he requested the first eighth grade waiver in the program’s history.

“It’s really hard to have an eighth-grade boy ready to fight high schoolers,” he says. “I have this little girl in eighth grade and she was ready, which was amazing.”

McLaughlin was nervous before her first practice.

“At first, I didn’t really want to be on the high school team,” she says. “I was afraid of a gang of high school students. I am an eighth grade girl. What if they don’t like me? I did a practice or two with the guys and they were really nice and got along really well. They treated me like one of them.

McLaughlin made her high school debut in the Scituate Opener on December 11, 2021. She lost her first match by decision, 5-1, against Kevin Robinson of Barrington, RI She followed with a 40-second pin for her first high school victory, then found herself facing Robinson again in the match for third place. She pinned it in 4:02.

“She came back to life after her first loss,” King said. “She is tough at the top. She hammers people on top. I like his tenacity after putting someone on his back.

But what excites King most is the potential the 5-foot-6 grappler has yet to discover.

“His talent is not that great,” he said. “She does so many things with her mental strength. … If his talent was already amazing, that’s where his ceiling would be. His skill has a whole level or two to jump.

A straight college student who likes to dive into a good book, McLaughlin doesn’t look too far when asked about her future.

“Hopefully I can win Women’s States next year,” she said. “I just want to improve as much as possible and see how far I can go.”

King, meanwhile, wonders if she could join North Andover’s Danielle Coughlin (the 2013 Division 2 champion at 106 pounds) as the only woman to win the MIAA State Championships wrestling boys. He can also see her struggling in an ever-expanding college scene.

“I’m optimistic,” he said. “I’m Team Sara. She’s a lovely kid. She’s this sweet, quiet kid off the mat. She gets on the mat and she’s a killer.

Steve Simoes retired after 19 seasons as the head coach of the Hopkinton baseball team, in addition to five years as the Hillers softball coach and 15 years as a football assistant. The 2005 Globe Coach of the Year led Hopkinton to five Tri-Valley League titles, three sectional championships and more than 300 wins. . . Amanda Sheey, the 2018-19 Massachusetts Basketball Coaches Association Coach of the Year, stepped down as Needham’s women’s basketball coach after nine seasons at the helm to focus on his family. . . Belmont has hired former Newton South assistant Darren Martinez as the boys’ head basketball coach. He replaces Adam Pritchard. . . Ashland announced Mike Schena as the new women’s football coach to replace Dan Keller, who quit after three seasons. Schena was twice named Greater Boston League Coach of the Year and won two championship titles at Lynn Classical.

▪ Thomas O’Brien, a 6-foot-6, 275-pound left tackle/nose guard from Reading, who will play a post-graduation year at Phillips Andover before heading to Harvard. . . Nashoba Regional senior amount Josh Cordio signed up to wrestle at the Air Force Academy. . . Former St. John’s Prep wide receiver Alex Lane will trade from Bryant for his senior season to Northeastern next season. There he will reunite with the former SJP teammate Tyler MacGregor, who graduated from Columbia. . . Former Boston Latin player Packy Naughton recorded his first MLB stoppage on July 8 for the St. Louis Cardinals.

Brendan Kurie can be reached at [email protected]