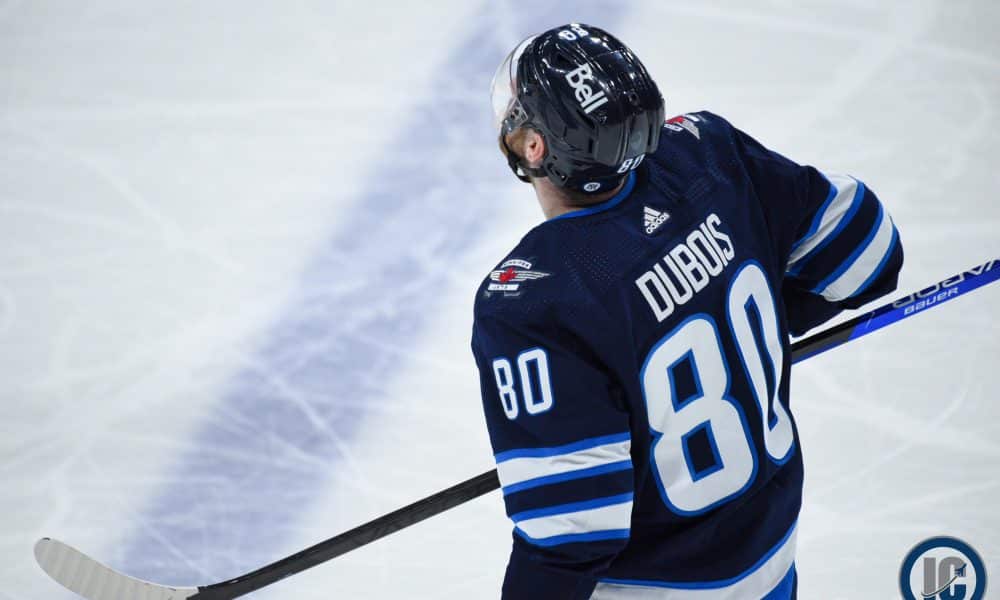 To note: The puck drop is at 7 p.m. CST tonight as the Jets take on the Stars tonight. After the game, be sure to check illegalcurve.com for all the post-game feedback.

Note II: We want you to join the conversation on the Illegal Curve post-game show once the final buzzer sounds.

Note III: When the clock struck 1pm CST, the news came out that Austin Pogansky had authorized waivers, which is huge news for a Moose club that is shooting right now and adding more offense can only help this top club in the AHL. The team will still need to make some moves later this afternoon (expect Perfetti/Reichel to be moved to LTIR) in order to be cap compliant. (Update: That’s exactly what they did).

TSN: Dubois is in his second season with the Jets. Although it wasn’t a banner season for the local NHL club, there were certainly some very bright spots and Dubois alongside Kyle Connor were the two brightest by a mile. Travis talks more about what Dubois has been able to do this season in Winnipeg.

The Athletic: Jets GM Kevin Cheveldayoff on trade deadline and playoff push – ‘We’re comfortable with this group’. (Paywall). We will see the truth in these words over the next three weeks. LeBrun had a one-on-one chat with the Jets general manager.

Winnipeg Sun: The Jets are looking to gain ground on the Stars. Scott previews the action.

Illegal Curve: Jets vs. Stars pre-game report. The Jets held a morning ice rink followed by a press briefing before facing Dallas. Discover projected lines and D-pairs and listen to the players.

Illegal curve: Morning papers. If you missed any of the news from earlier today, we’ve got you covered..

Sportsnet: The vibe around the Jets locker room is getting stronger as they get healthier. Brenden Dillon and Kyle Connor discuss what bringing key players back to the roster and dressing room, like Nik Ehlers and Andrew Copp, does for a team’s confidence and momentum in such an important part of the season.

Sportsnet: The Jets’ Dillon relishes the opportunity to throw text messages at his old pals. Defenseman Brenden Dillon discusses whether he has any additional charges against an old team, like the Stars, where there are still many of his former teammates and friends, and I think you’ll like his response.

TSN: The Jets feel a sense of optimism with Ehlers, Copp is set to return. Nikolaj Ehlers and Andrew Copp are set to return to the Winnipeg Jets roster, and forward Kyle Connor says the team is “thrilled” for them, while head coach Dave Lowry and the d -man Brenden Dillon agrees that Ehlers will specifically bring a special element that the team lacked. Editor’s note: Copp is obviously already back in the lineup.

TSN: Nikolaj Ehlers discusses his ‘weird style of hockey’ with Bardown’s Jesse Pollock. When you think of a weird style of hockey, Winnipeg Jets forward Nikolaj Ehlers probably isn’t the first name that comes to mind. But maybe it should be? In case you didn’t already know, the Danish star isn’t your average player when it comes to style. Do you use any of his tricks? Jesse had the chance to chat with him and learned a lot about one of his favorite players.

The Rod Pederson Show: Darren Dreger talks about the Winnipeg Jets. Tim Peel made some pretty critical comments about Mark Scheifele after his game against the Montreal Canadiens, were they right or wrong? Darren Dreger of TSN joins to talk about it and give us his opinion on it! He also talks about a potential Jets rebuild, Russians in the NHL, and more!

CJOB 680: Fly By Podcast. The Jets are looking to extend their winning streak to three games when they face the Stars for the fourth and final time this season. Paul Edmonds and Jamie Thomas of 680 CJOB talk about Nikolaj Ehlers’ return from a knee injury and the importance of the Jets’ special teams.