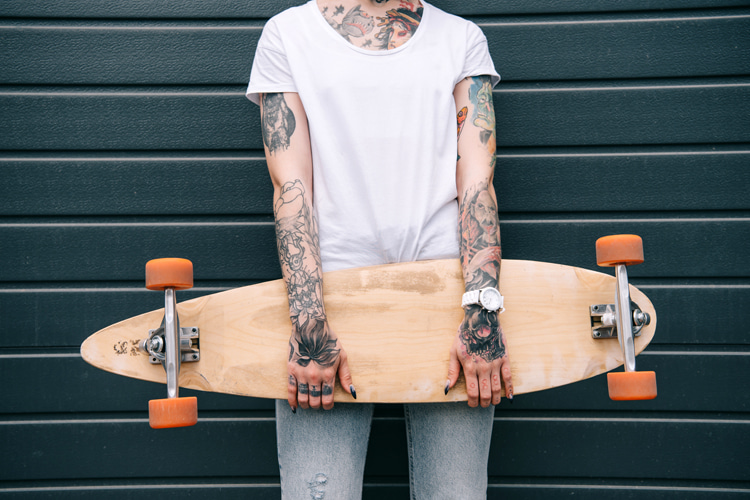 What is a longboard skate?

Longboarding is one of the most popular types of skateboards. Here’s everything you need to know about the classic sidewalk surfboard.

Cyclists use longboard skateboards for many purposes and in many skateboarding contexts and disciplines, including downhill, freestyle, slalom, street luge, cruising, carving and dancing.

Technically speaking, a longboard is a large skateboard that ranges from 38 inches to 60 inches (96-152 centimeters).

The name has its origins in longboard surfboards, which are much larger than traditional shortboards.

Preston Nichols was one of the first to build a longboard in the late 1940s, early 1950s.

The goal was to keep surfers entertained and fit while waiting for the ideal ocean swells.

In fact, the first longboard skate models were inspired by the long wooden surfboards of the 1950s and 1960s – they had a similar shape and, in a way, behaved identically.

The skate and snow pioneer and founder of Sims Skateboards started building large boards using water skis in the 1970s.

“Tom was known for his extremely fluid style with a longboard,” notes Michael Brooke, author of “The Concrete Wave”.

“He started out with water skis and experimented with a variety of woods and laminates. The other longboard pioneers of the 1970s were Ed Economy and Brad Stradlund.”

The Sims entered and won contests and began producing commercial longboards in five different lengths up to 48 inches (121 centimeters).

These innovators drew lines with their boards inspired by surfers like Gerry Lopez, Montgomery “Buttons” Kaluhiokalani, and Larry Bertlemann.

Later, Brad Stradlund will add the influence of Jay adams and Tom Inouye in his longboard riding style.

â€œI go fast, I draw lines and pretty much like I’m pretending to be surfing the sidewalk,â€ Economy added.

Hobart “Hobie” Alter was one of the first to get into longboarding.

Around 1964, the legendary watersports entrepreneur designed a new board called “The Hobie Super Surfer Skateboard by Vita-Pakt”.

The investment paid off.

The boards were a commercial success; the team reached several competition podiums, and “The Hobie Super Surfer Skateboard” eventually crossed the Pacific Ocean and reached Hawaii.

After a sudden decline in the second half of the 1960s, longboard fever returned with the introduction of the urethane wheel by Cadillac Wheels in 1973 and the revolutionary reverse pivot system.

The reverse pivot truck was a key innovation in the rapid development of downhill skateboarding.

In the early 1990s, longboard skateboards incorporated cut-out decks that prevented the wheels from touching the board during sharp, hard turns.

The longboard revival was spearheaded by the people of La Jolla, Steve Lake and Dennis Telfer, founders of Sector 9, in 1993.

The duo wanted to design a skateboard that rides like a surfboard or a snowboard.

The brand has grown exponentially and other companies like Gravity Boarding Company (Gravity Skateboards), Decomposed, Pavel and Sk8Kings have followed in Sector 9’s footsteps.

New truck systems have also been designed to provide greater stability, better turns and the feeling of riding a wave on concrete.

With the advent of the X Games era, street sledding has also become a popular underground discipline.

Lying on the boards, skateboarders began to hurtle down hills at speeds of over 70 miles per hour (112 kilometers per hour) with far less wind resistance than their fellow stand-up runners.

In the 2000s, Southern California skateboarders outfitted their decks with monster trucks and off-road wheels and started propelling themselves along the trails with sticks.

â€œIn 2014, US sales of conventional sets (fully assembled decks, trucks and wheels) for street and skatepark were just ahead of longboard sets for downhill and cruising,â€ adds Borden.

Additionally, in 2014, Kamloops, Canada inaugurated the world’s first longboard track, a C $ 100,000 investment that created a 380-meter downhill track with 14 turns and hairpins for gliding and drifting.

How, when and where to ride a longboard

Longboard skateboards are the perfect sidewalk surfing equipment for beginner, intermediate and advanced riders of all ages.

These long planks of wood provide a smooth, cushioned ride and are incredibly tolerant of concrete, tarmac, and other slick surfaces.

â€œThe perfect location for longboarding is a long, winding path or an open road with little or no vehicle traffic – bike paths, seaside walks and low-traffic roads,â€ says Berger.

Longboarding is not the weapon of choice for areas with obstacles like curbs, green ramps and stairs. But they are designed for rough terrain.

“Thanks to the large, bouncy wheels, longboard skateboards can roll right over the rocks and twigs that would send a street deck rider flying through the air, so they are able to navigate more terrain.”

In contrast, the ultra specific downhill longboard is designed to bombard more or less steep slopes and mountain roads at high speed.

Descent bridges can also be used for commuting and cruises. And they’re still fun to drive.

Longboarding is a versatile skateboard and one of the most environmentally friendly forms of urban transportation.

More and more technical skateboarders are including a longboard in their quiver.

It is also the cross-training exercise of choice for average and professional surfers and snowboarders.

Today, longboarding is more than a trend or a movement – it is a well established and growing discipline of skateboarding.

â€œThe realization that there are different types of skating without ollies and ramps took me by surprise,â€ longboarder Justin Metcalf once said.

“I had my first longboard and felt like I was learning to skate again.”

Dimensions of the bridge, wheels and trucks

However, today they can also be constructed from solid wood, bamboo, fiberglass, and other man-made materials.

“To strengthen a longboard, manufacturers add two or more layers of long-grain maple veneer. Graphics on longboards are also available in a wider variety, from hot-transferred graphics to decorative wood veneer.”

Wheel sizes range from 60mm to 100mm with a hardness of around 78a to 90a – the larger and softer the wheel, the smoother and smoother the ride.

A longboard typically comes with reverse pivot trucks of around 8 1/2 inches and goes up to 10 inches wide.

A downhill longboard tends to be made from fiberglass, epoxy, and Kevlar, with all layers laminated against a mold.

Longboard skateboards come in a variety of shapes, display multiple designs, give skaters more floor space for their feet, and shift their weight.

The most common model is the classic pintail, a surfboard-shaped longboard that leads with a soft round nose, widens in the center, and then tapers into a tail.

â€œThese bridges often have a concave curve across the width; some have a slight upward curve from nose to tail known as camber, â€says Berger.

“Kicktails are optional, and few involve a kick in the nose.”

â€œBecause trucks and wheels are big and tall, a longboard deck often has fenders that prevent the wheels from making contact with the deck as you lean into a turn. “

There are several commercially available forms of longboard – fishtail, hybrid, cruiser – but these are mostly versions of the original and timeless model.

The outline of the bed ranges from almost flat to slightly concave to a drop-through style, which features extreme curvature and special truck support.