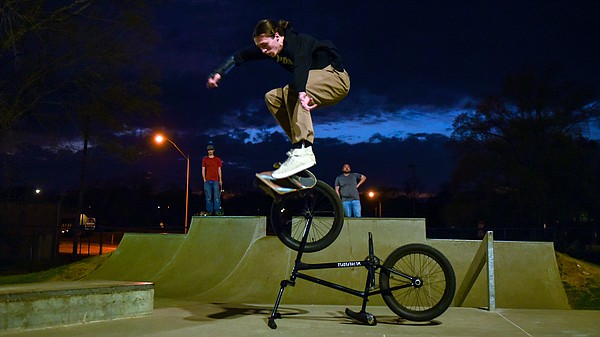 Lucas Chambers and Kam West will bring their respective competitions to the city’s Skatetopia skatepark later this year.

Chambers, 23, and his friend Matt Dillard are bringing the annual Skatefest back to Skatetopia for the third year in a row.

After COVID made last year’s Skatefest difficult to organize due to scheduling and pandemic constraints, Chambers and Dillard are determined to give skateboarders something of their own.

Chambers has been skateboarding since second grade and still finds freedom on wheels.

“It’s just one of those things you can do and not think about anything else,” he said.

Chambers and Dillard grew up skating in what locals called Dave’s Skatepark, a downtown spot where teenagers skated indoors.

“I grew up there and was always surrounded by community things, like their competitions and events,” Chambers said.

Through his passion, Chambers developed a sense of community with other skaters, especially Dillard. Both had the idea of ​​creating a skate festival for the locals.

Chambers said having friends with kids made her want to bring back family events as a way for everyone to hang out and have fun while staying in touch with each other through to a common interest.

Skatefest is open to all ages and has three categories of competition: Beginner, Intermediate and Advanced. Registration takes place on the day of the event at Skatetopia.

There is also a category for best costume. Over the past two years, costumes have varied from Mario and Luigi to printed tuxedos and Michael Myers.

Berridge Bikes has donated skateboards and supplies to winners in the past, but this year Chambers and Dillard are looking for sponsors to cover overhead costs and help grow the festival.

“The money will be used to organize the skate festival next year,” Chambers said.

The event is free to the public and competitors, and donations are accepted. Organizers will post schedules and other information as plans for Skatefest develop.

21-year-old DJ Kam West is hosting his own skate festival in Skatetopia later this year. The We Outside Festival will take place from 1-6 p.m. on July 3, presented by Spacekid X DTR.

Although West isn’t a skateboarder, he grew up hanging out at the skate park with his friends.

“Skating has always been something I wanted to learn, but could never master,” he said.

Still, Skatetopia left its mark on West. It was a place where he often cycled and could satisfy his curiosity. Since almost all of West’s friends skate, he thought his first festival should center around the sport.

The festival is family friendly and open to people of all ages and skill levels. Cyclists are also welcome to compete.

“It’s important that other kids get exposure to skateboarding as well,” he said.

The festival is not just for fun. Winners will receive first through third place cash prizes of $200, $100 and $50 respectively.

The categories will be divided into different skill levels for Freestyle and Time Trials. A full list of competition rules will be available prior to the event. Registration is $10.

Live performances by IV Dreams Skate Group, a collective founded by Lucas Chambers, will take place during the competition, and food, drink, games and merchandise will be available for purchase.

“I would like to have some sponsors, if possible,” West said.

So far he has a team of graphic designers, people with a construction background and a marketing person to help with planning and development.

“The city of Texarkana, Texas is helping tremendously with the security and marketing of the event,” West said.

His friend, Jaylan Washington, made the flyer.

West said he understands the importance of allowing other people to help him if he wants to grow his event.

“We hope to raise enough money together to be able to fund next year’s event to be even bigger,” he said.