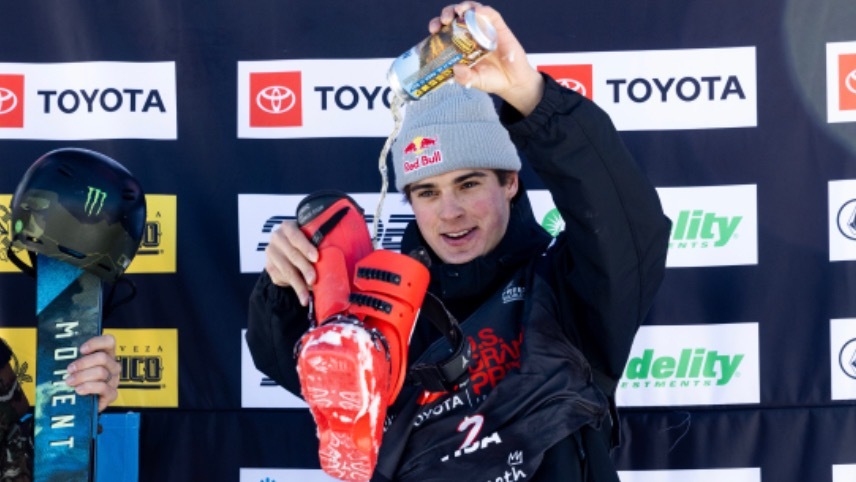 It’s fair to say that 2021 probably hasn’t been so productive for most of us. That certainly can’t be said for Kiwi teenager Nico Porteous. His gold medal in the superpipe at the X Games in January was followed by a gold medal in the halfpipe at the World Championships, which made him, in the eyes of many, the favorite to win the gold in Beijing.

Nico is doing his usual ‘Shoey’ celebration, but will we see him in Beijing?

I met Nico for the first time in Crans Montana, at Audi Nines last April. Just to show what a weird year it was, with restrictions changing by day and by country, we had this conversation on the phone, even though we were together on the mountain about half an hour later.

“I was really excited to get back into the starting grid and start racing again. We had a great winter in southern New Zealand in 2020. The setup that Cardrona built was crazy. sick snow, great weather and I think it was one of the best seasons yet. It took me with a really good frame of mind into the northern hemisphere winter and we had a few weeks of training at Copper before X games.”

“I just changed my mindset a bit. After the Olympic Games in 2018 I became so obsessed with results for a while, now I don’t really care about results anymore. I know it sounds really cliché, but now I just want to go out and give it my all. Don’t leave anything on the table and try to be the best skier you can be, rather than worrying about what the judges are going to score me. I feel like that spirit and the amazing New Zealand winter made me feel great.

He left Aspen with another gold medal and his focus might now turn to the world championships, but a different sport has hampered his preparation for it.

“I ended up breaking my 5th metatarsal. My little toe, all the way to the arch of my foot.

So, in preparation for the world championships, I only left home twice in three and a half weeks. I was just at home. I was doing some sort of rehab every day, just to make sure I was staying strong.

Wake up, grab a coffee, have some breakfast, hit the gym, do some admin, then go back to bed. It was his routine for three and a half weeks. With only two days until the world championships, he actually returned to the snow.

“It was still a bit sore, but I managed to manage and keep skiing.

I was definitely a little rusty, but I guess I was lucky that every halfpipe event last year was on the same halfpipe. I just felt comfortable and throughout rehab I kept thinking about skiing and tricks. Because I was surrounded by skiing, living in the team house, in Aspen, I watched clips of them and watched ski movies. In the end, it all came together. »

Having won gold medals in both X Games and the World’s Championships, he would be forgiven for starting to wonder if he could improve the Olympic The bronze he won in 2018.

“To be honest, I didn’t think as far as the Olympics. A few people have asked me if I’ll take my Olympic bronze to gold, but I think with this mindset change, I just want to get out there, ski and do my best. I didn’t really think about the results, I thought about what I want to do and what I want to ski. Obviously an Olympic gold medal would be amazing, but I just want to get out there, do my best and see what happens.

Other people might try to pressure me after those gold medals, but I’ll do my best not to let that affect me.

Nico “stayed with what worked” and did the same for his two titles last winter. The culmination of these runs was the consecutive 1620s. While 16s were “crazy,” he thinks 16s will eventually become a standard pipe trick, like 12. It might even happen in Beijing, where triples might not be impossible either:

“It’s hard to say though, I’m not sure I would really like it to happen like this. My highlight of last winter was my run at the World Championships, it’s the best I’ve ever had. I’ve never skied in my life. I know 16s are spins to win and there’s a lot of spins and flips, but I’d rather push the sport in the direction of 16s and all the creative flips. Like Noah doing the Bone Roll and Pete Verheyde doing it forward, hazy in. All those different directions and creative things to do in a halfpipe should come before the triples.

Last winter’s competitions were quite unique, for a number of reasons, and affected each skier differently. The Kiwi was pretty blunt when we touched on one of the more obvious adaptations.

“No crowd is sick. I love it. Some people get really pumped up by the crowd and really bounce off the energy. For me, no crowds were sick because it was just like another practice run and I could just go skiing. I didn’t have to worry about who was watching or if the crowd was going to scream. It was just me and a halfpipe. It was such a cool feeling, standing on top of X games and no one being there, just silence, that was super cool. It was quite a unique experience. »

X games competitors were tested every other day and had to be tested before going skiing. There was a bubble, but if someone tested positive for COVID, they couldn’t participate in the next event.

“Everyone was super cruiser and super cool, but trying to stay low and not get COVID.”

After his turbulent but ultimately successful season, Audi Nine was a chance for the teenager to relax.

“This event always blows my mind, it’s a highlight of the season, but this year it’s such a great way to end the season. It’s so nice to get the whole gang together, see all your friends, shred and hang out.

There were still restrictions, but the proximity, Bay of Alaïa, the wave pool provided a good kind of unique experience!

“With surfing; getting stuffed and staring at the Swiss Alps is the craziest feeling. I had to loosen up on the skateboard a bit, because of the footing, but the atmosphere and vibe was such a breath of fresh air after such a strange year and a half. You can almost see the light at the end of the tunnel. It gave me hope.

Surfing in the middle of the Swiss Alps credit: Florian Breitenberger

The line-up of skiers at Nines included quite a few Freeski legends. Despite his trophy cabinet, like any teenager would be, Nico is still getting used to hanging out with some of his peers.

“It’s always such a shock. Not so long ago I was watching these guys in videos and they were my idols. They still are, but now I can shred with them. It’s still so, so breathtaking to me. I met Woodsy when I was nine, so I’ve always looked up to him.

There are two people at this event, skiing with Dollo is crazy, my heart races even when I talk to him! He’s an icon and he’s a freeskiing legend.

Candide came in yesterday and it was like, ‘Holy shit! Candide is here!

It’s kind of all everyone talks about, like ‘fuck, is Candide there?!’

It’s so crazy that five years ago I only saw these guys on videos on Newschoolers!

But as New Zealand’s winter of 2020 lined up perfectly to hit the northern hemisphere at full speed. This past New Zealand winter was a “flop” with Covid shutting them down for a big chunk until the middle of the season.

Always positive, Nico was really looking forward to going overseas, as well as in the starting grid.

Last week he watched him win at Mammoth despite less than ideal preparation, stomping a “shoe” of his ski boot on the podium for good measure. The win will provide a big boost ahead of big contests on the horizon and of course the big show in Beijing. Typically relaxed, the Kiwi champion looks forward with a simple vision: “Life is already a journey, so let’s keep pushing things forward.”

Tower: I should say a straight air in the halfpipe. It’s not a gimmick, but that moment where there’s zero gravity and you adjust a mute or something. For me, the big straight tunes are so doping. So funny!

Trip: Obviously, spring at home in Cardrona is so much fun, but I think I have to say Chad’s Gap. That would be gnarly, but that’s a to-do list for me. If it was perfectly constructed and all I had to do was show up.

Track: I’m a big fan of house and techno. I make my own music and I DJ a lot at home, but this year I have to say “Rage” in Blister. It’s my drop song for every event, it’s a surf punk song, by a group of surfers. No lyrics, just very fast. It excites me very well.

Newly-returned Kirill Kaprizov plays like an All-Star, Matt Boldy ‘looks like he belongs’ in Wild’s win over Ducks – The Athletic