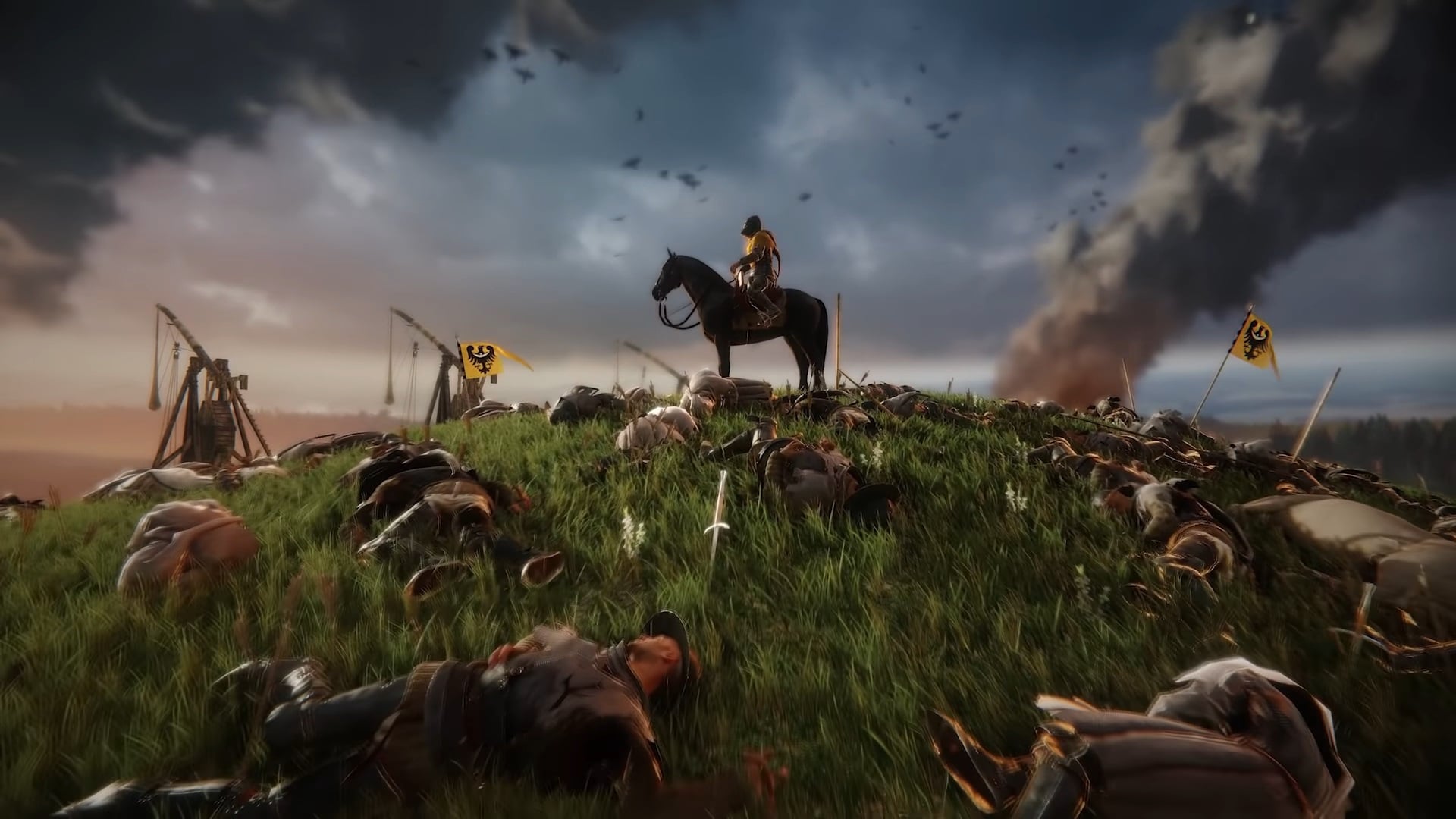 Xbox sales are great for offering many different genres of games at discounted prices, and this week the TA press team found a range of very different games to recommend to you, dear readers.

The TA press team has once again been digging through Xbox sales to find you their picks, and this week looks like it’s going to be a varied bunch. We take you on many journeys, from arduous treks through medieval battlefields to strolling through memories, from kickflipping on a skateboard to flipping and kicking someone in the face, and if you you’re feeling particularly adventurous, how about dying and then investigating your own murder? If this intrigues you, find out below…

Bargains from the latest Xbox sales

It’s kind of crazy that you can get the amount of content Kingdom Come: Deliverance has for 75% off. I generally love fantasy elements in medieval games, but Kingdom Come: Deliverance’s emphasis on more realistic aspects really worked well: you play as Henry, the son of a blacksmith, and to start with, you can’t not to do anything. Henry doesn’t know how to fight, read, pick locks; he’s not a legendary hero, he’s just Henry. He needs to sleep and eat like everyone else, his clothes and gear aren’t invincible, and he can’t just stack whatever he finds in his inventory because food disappears if you leave it too long, or it will become overloaded. He needs to haggle over goods and keep an eye on his reputation. If he eats too much, he suffers. If he can’t heal himself, he bleeds to death. It really makes you attached to Henry as he sets off on a quest for revenge, and every skill you successfully learn feels like a real achievement. You can delve into all aspects of medieval life in Kingdom Come: Deliverance, and watch Henry grow from a humble (a bit dimwitted) person to a warrior to be reckoned with. You can waste hundreds of hours at Kingdom Come: Deliverance, and getting it 75% off is a bargain that Henry would approve of.

Kingdom Come: Deliverance is a story-driven, open-world RPG that immerses you in an epic adventure in the Holy Roman Empire. Avenge the death of your parents as you battle invading forces, participate in game-changing quests, and make influential choices. Explore majestic castles, deep forests, prosperous villages and countless other realistic settings of medieval Bohemia!

After a certain point, I have to wonder how much hyperbole I have to throw at something for people to realize a game is cool. Session doesn’t really need this, though. It’s so laid back and indifferent to one of the arcade gameplay hooks that made those Tony Hawk, OlliOlli, and Skate games fun. It really doesn’t give a flying kick. It cares about physics simulation, mimicking the real-life feel in the controls and having fun. I played in Paris during Bigben Week alongside The Lord of the Rings: Gollum, Steelrising and WRC Generations and to be honest I ended up hanging out with the PR guys because they showed me how to how much better they were than me at Session as we freaked out the first time I managed to ollie off a ledge. Thanks guys – ego boosted. That’s the fun of Session: find a line you like, try to string together tricks, then stick with it until you get it. Then you play it back, record it, imagine it with a absurd number of camera options and share it with others. That’s it. Feels good, looks awesome – I’m in love with it. The session is utterly fantastic and if it piqued your interest, I feel like my job is done and you can go and pick up the game without worry or worry. Hyperbole avoided.

Designed by and for skateboarders, the dual-stick controls faithfully replicate your feet on the skateboard for an ultra-realistic experience. Try iconic real-life skate spots, customize your skater and gear with gear from top brands

Every once in a while I think back to when we saw Peak Capcom as the publisher replaced Marvel vs Capcom 3 on Xbox 360 with an upgraded Ultimate version of the crossover fighter. in the same year. Savage. Yet Ultimate’s hugely expanded roster creates even more ridiculous three-on-three matchups and even greater potential for insane combos where the whole team rolls into action to really hit a number on the bars. health of your opponents. It’s flashy and fun on a basic level, but really comes into its own if you’re willing to put in the time to get the most out of any given team/trio – Capcom has done a great job giving many characters their own unique gimmicks (like Frank West needing to take shots to level up and improve his moves, or Phoenix Wright attacking with bubbles and racking up evidence to destroy enemies with an overwhelming verdict of “guilty”. ), and there are hours of fun playing with the characters to see what they can all do. Unfortunately, Marvel’s follow-up to Capcom Infinite was a huge step backwards from what made it so good, and even a decade later UMvC3 is still one of the best tag team fighters.

Ultimate Marvel vs. Capcom 3’s achievements, however, are a bit silly. If you want completion you will have to complete almost all missions (some of the last ones are brutal), complete Arcade mode at least 51 times to see all the endings, rack up a ten win streak in online ranked matches, and take on every character online, which you’ll probably need to bolster because there’s a bunch of characters that see little to no use . It’s a difficult and error-free list, but UMvC3 is a fantastic fighter even if you don’t want to commit to the grind of some of those particularly spicy achievements.

Marvel and Capcom join forces to fight the most frantic 3 vs. 3 beacon battles ever with Ultimate Marvel VS Capcom 3. This version comes fully loaded including all previous Marvel VS DLC. Capcom: Official Complete Works, and offering Full HD 1080p resolution at 60 frames per second.

Sean – What remains of Edith Finch?

I’ve covered What’s Left of Edith Finch countless times on TA before, and you’re going to have to put up with me doing it again now, I’m afraid. If you missed WRoEF when it was on Xbox Game Pass, you should grab it now for $5.99 / £4.79 / €5.99, which is more than worth it. You play as Edith, who has returned to her family home in search of answers as to why she is the last surviving member of her family. While exploring the chambers of his deceased relatives, each death is introduced to players via a short gameplay sequence, which gives you more history and understanding of each family member, some of which are downright heartbreaking. What Remains of Edith Finch is often described as the best walking simulator, and it is. The story is fantastic and the short gameplay sequences are both memorable and engaging. What Remains of Edith Finch is also a quick and easy achievement – ​​you’ll get 1,000 Gamerscore in under three hours, and you’ll have a hell of a good time doing it.

What Remains of Edith Finch

What Remains of Edith Finch is a collection of bizarre stories about a family in Washington State. As Edith, you’ll explore the colossal Finch House, searching for stories as she explores her family’s history and tries to figure out why she’s the last of her family left alive. Each story you find allows you to experience the life of a new family member on the day they died, with stories ranging from the distant past to the present day.

The PC version of this game does not support Xbox Live

While Murdered: Soul Suspect doesn’t give you much in the way of ingenious new mechanics or engrossing story beats that keep you on the edge of your seat the entire time you play, it does give you entertaining entertainment to through the spirit world for a few hours. I like a mystery game, a good detective story, or just about anything that starts with someone dying. This time, however, that someone is you. As a fantasy apparition of your old self, you must roam what appears to be a cute little town in search of your killer – yes, I know that’s an oxymoron, but you do! However, you are not the only one hunting down the living, so you come face to face with other ethereal creatures known as demons. It’s a stealth game, so once they get their hands on you, you’re pretty much screwed and will be kicked out through a checkpoint system. It adds a dash of danger to the mix, which is certainly appreciated, given that the story itself isn’t too forceful in its execution. Honestly, you definitely get more than what you pay for with its current 85% discount, and all Murdered: Soul Suspect achievements can be completed in under ten hours, so it’s a winner either way.

A dark and supernatural crime thriller with a unique gameplay twist: solve your own murder in the afterlife.

Will you grab one of our recommendations, or is there something in sales you think we should try? Let us know in the comments!