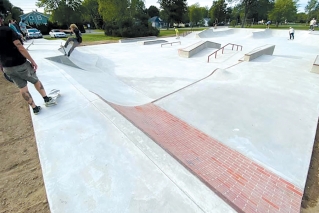 Skate of the union Bangor Skatepark is speeding things up – Style

BANGOR – Put on a set of wheels or step onto the deck – after years of construction, the new Bangor Skatepark is open for business.

Located at Hayford Park on 13th Street in Bangor, the skatepark features approximately 7,000 square feet of concrete, with ramps and bars for tricks. The Bangor City Parks and Recreation Department opened the park to the public in early September. Skateboards, bikes, roller skates – and any other wheeled device you can think of – are welcome.

For Drew Lohman, member of the Bangor Skatepark Committee, who advocated for the construction of the park, this is a monumental achievement. â€œThis is Maine; we don’t have a lot of skateparks here, â€says Lohman. â€œThe closest skatepark to Bangor is Bar Harbor or Augusta. Now that the skatepark is here … it has become one of Maine’s first skateparks.

It is not easy to win the title of “first”. It’s also not easy to build a nearly quarter-million dollar skatepark … in a small town in Maine … during a global pandemic. But a skatepark doesn’t happen overnight, as the old saw says. The Bangor skate community has been diligent in their efforts to bring this project to fruition.

It all started in 2012, when the long-standing Bass Park skatepark was removed to make way for the Cross Insurance Center. The ramps were moved to a former foundation on Union Street, dubbed “The Slab,” as a temporary home, as the city discussed relocation plans. Unfortunately, these plans were put aside. The slab was not fully visible from the road leading to some unsavory events, and as it fell into disrepair, local skaters found themselves without a safe space to congregate.

Fast forward to 2016, when Bangor Parks and Rec announced that they had earmarked $ 125,000 for a new skatepark. The question was – where? The Bangor Skatepark Committee, made up of local skate enthusiasts, played an active role in the deliberation. â€œStarting in 2016, I attended every town hall meeting regarding where the skatepark was going to go,â€ committee member Lohman said. Finally, in 2019, the city chose a location at Hayford Park.

There was one problem: $ 125,000 would buy only 2,300 square feet – that’s half the size of a basketball court. Unless more funds were raised, local skateboarders would be stuck with the Tinkerbell of skateparks. But the Bangor Skatepark Committee was willing to linger: they raised $ 45,000 between January and April 2021. Donors included the Maine Community Foundation’s Ollie fund, Jane and John Bragg, Bangor Savings Bank, Cross Insurance, Stoked Real Estate LLC and The Skatepark Project, as well as community members, who donated through the Parks & Rec website. Soon after, the city contributed another $ 50,000. The skatepark had more than tripled in size, reaching 7,000 square feet – large enough for the Statue of Liberty to sunbathe on the concrete.

The initial plan called for several construction phases, spread over months. The fiscal expansion, however, allowed all constructions to be completed at one time. Apart from a little landscaping to be done, the park is in its final form. That’s good news for skateboarders, who flock from across the state – and more distant horizons – to frequent the park. A young acquaintance met a roller skater looking for skateparks across the country. (She called it a â€œFifty State Skate.â€) Of course, the main clientele is closer to us. Visit the Bangor Skatepark on a clear afternoon and you’ll find local skaters, young and old, practicing their craft. They’re not indoors, looking at the pocket-sized internet – they’re surfing, flipping their boards, loud and happy.

The park’s grand opening event, a Halloween Skate Jam, will take place on Sunday, October 10, from 11 a.m. to 4 p.m. The skating contest will run from 1 to 2, with prizes including a $ 20 gift card to Pat’s Bike Shop. Pompeii Pizza will prepare the dough. Disguises are encouraged. Skate on it – you definitely won’t be on board.

Microsoft: Xbox and Adidas team up to celebrate 20 years of gaming

Teenager queues up at skate park building his own epic ramp