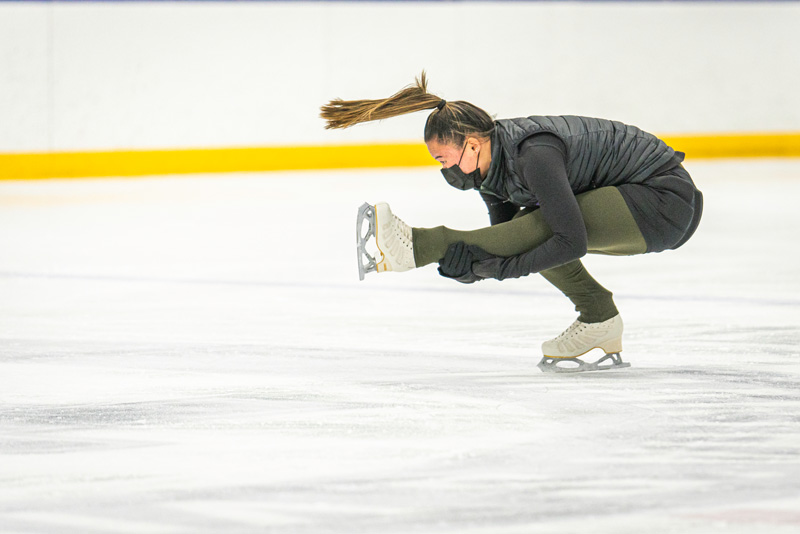 On Ice – The Martha’s Vineyard Times

Back when Martha’s Vineyard Ice Arena was an outdoor ice rink, Finkelstein and Glavin sought to teach people, especially young people, the fundamentals of skating: how to choose and size your skates, how to accelerate, how to turn and of course, how to stop.

But the instruction didn’t stop at the basics. Both skaters have decided to bring in the coaching staff from Falmouth so that anyone interested in further progressing in figure skating or ice hockey can benefit,

Cue Beth O’Connor, who currently runs the skating club alongside Jane Taylor. O’Connor joined the club in 1984 after attending the club’s annual ice show. She told The Times that the very first time she saw the figure skaters, she was in love with the elegance and skill involved. “I was like, Wow, that’s amazing. I would love to be a part of that,” O’Connor said.

At the time, O’Connor was dancing five times a week, which she very much enjoyed doing. But she wanted to challenge herself and ended up asking (repeatedly) her mother if she could join the club.

Eventually, O’Connor’s mother relented and brought her to the rink for a few lessons. At the age of 9, O’Connor was immediately hooked and the passion for her never wavered. “I still love it, of course, but now I want to help others who want to improve,” O’Connor said.

She skated all through high school and took time off the ice to go to college, but realized in her senior year that she didn’t want to be a math teacher like her. originally planned it. “I wanted to do an ice show,” O’Connor said. With this epiphany, she put her skates back on, signed up for more lessons, and began training daily. She recorded audition tapes, sent them to various producers, and got a job as a professional figure skater.

Over the many years of the club’s existence, programming opportunities have expanded so that people of all ages and abilities can join the club and improve their skating abilities (or learn the basics). For O’Connor, it’s always been important to illustrate how the rink isn’t just for ice hockey players. Once it became known that a new figure skating program was available, the number of participants exploded. “Being a small community, parents talk, kids talk, ‘Oh, does your kid do that? I could ask my child to try. It’s really a word of mouth thing on Martha’s Vineyard,” O’Connor said.

In the early 1990s, O’Connor’s mother, Nancy Blankenship, became the club’s treasurer. She founded the first club competition in 1992, which began as a one-day event that often filled the stands with cheering spectators. A few years later, the competition ran for an entire weekend and clubs from all over New England, New York and other places came to the Vineyard to show their stuff. “The most amazing part is that this group is made up of parent volunteers on the board who dedicate their time and energy to creating something great for their children,” O’Connor said.

As of now, the club is gearing up for its 33rd annual ice show on Friday, April 8 at 6 p.m. and Saturday, April 9 at 1 p.m. The theme for this year’s show is “Live, Love, Skate”, and is performed by Taylor. According to O’Connor, more than 100 skaters of varying ages and abilities will participate in the show.

The MVFSC offers four different levels of programming. The oldest is her grant-funded preschool program, which has been running since 2005. O’Connor said she regularly contacts preschools and daycares on the island to see if they have children at the appropriate age. who wish to participate. It’s a very minimal price, O’Connor said, and pointed out that the program lays the foundation needed to start learning the basic moves. “We want them not to be afraid of falling, not to be afraid of the ice,” O’Connor said. “I can’t tell you how many times I’ve heard, ‘What happens if the ice cracks? Am I going to fall in the water?’ »

O’Connor always assures children that skating is safe when done under the right supervision and with the right instruction and knowledge. She said a lot of kids have anxiety and fear when it comes to being on the ice, so the first trick she teaches young skaters is how to fall. “Because all great skaters fall. It’s really important not to let that stop you,” O’Connor said. “You have to know how to fall and stop. Those are the two really essential things.

The club also offers an initiation to skating program divided into age groups: snowballs are for 3 and a half to 5 years old and snow gliders are for 6 years and older. This program is full this year and there is a long waiting list for children who wish to register. “The rink will close for maintenance in April, then we’ll reopen in the summer and resume classes in the fall,” O’Connor said.

After the learn to skate program, once skaters have reached a certain level, they can enroll in the bridge program, the club’s junior figure skating program. This is when kids can take lessons and progress through the skating ranks to learn more advanced skills like spins, jumps, and other tricks. After graduating from the bridge program, skaters enter the freestyle program, which follows the US Figure Skating Association curriculum.

For O’Connor, each element of skating involves a different life lesson. The most important thing it taught him was how to be confident in his own abilities and how to overcome mental barriers to achieve greatness. “There are moments of glory, moments of defeat, moments of agony. Jump after jump and just no landing. My mother used to call me a Zamboni, because I spent so much time falling on the ice,” O’Connor laughed. “You’re up there all alone with the spotlight on you, trying to leap over a tiny 7/16 inch off a blade that’s only eight or nine inches long . It’s a mental, physical and emotional sport, and that’s why I love it.

Anina Garvin, 14, told The Times she started figure skating when she was 3 years old. Her preschool was doing trips to the rink, and eventually her mom signed her up for the program. At first, she struggled to master some of the basics, but after enough practice, things clicked for her. “I was like, ‘Hey, I can do this.’ It’s a really cool feeling when you land a jump and you think about it and you’re like, ‘All that work for this,’” Anina said.

According to Anina, she has been working on her axel jump for almost a year now. It’s a turn and a half in the air. Although she tries to compete when they come up, Anina said that 99% of the time she is competing against herself. She competed in the November Vineyard Open for years, which was canceled last year due to COVID.

Once she lands her axel, Anina will transition from her novice moves to her youthful freestyle moves. She said she was glad she kept skating and advised anyone interested in getting involved to get out on the ice and start learning the basics before trying a jump or spin. “It’s really difficult, especially in the beginning, but don’t let that put you off. You will land eventually if you keep working on it,” Anina said.

Maia Donnelly, 16, said she would come free skate with her dad when she was in kindergarten. “We would come in to practice for a few and then go get a donut; it was so much fun,” Maia said. Maia is very passionate about skating, and although she is confident in her abilities, she tends to be quite hard on herself, she said. “I would say control the frustration when things don’t go exactly my way, but it’s definitely something that figure skating and hockey have helped me improve and deal with. Over the past few years, I’ve gotten much better at just taking a deep breath and moving on.

Maia’s next goal on the ice is to land a triple axel, and at that point, it’s all up in the air.

Ryan Giordano, 17, said he started with hockey skates and progressed through his learning to skate and entered the bridge program before moving on to figure skates. Ryan has always marveled at the skaters on television at the Winter Olympics and other major competitions. He is now working towards manifesting his goals of becoming an Olympic figure skater and rising to the highest level of the sport. “Now, being in the college process, I think about competing and training every day,” Ryan said. “I’m looking to go to nationals and then I want to get to the Olympics. I just realized recently that I have these dreams now.

In January, Ryan made Vineyard figure skating history by pass their second gold exambecoming the second skater to do so in Martha’s Vineyard Ice Arena‘s 40-year history.

Ryan completed his senior solo free dance, which is a choreographed three-minute program with skating skills and spins, but no jumps.

According to Ryan, he’ll be skating all through college, and after that the possibilities are endless. For him, being the only man in the club, Ryan wants to show the other guys that figure skating is far from just a girl’s sport and that there are opportunities for men who are passionate about skating outside of hockey.

“I can’t wait to go to college and join a club with more people and more male skaters,” Ryan said. “Don’t say to yourself, ‘Figure skating is just a girl’s sport.’ It’s a sport for a guy and a girl, and don’t let anyone stop you from achieving your dreams.

Martha’s Vineyard Ice Arena offers free skating sessions to the public on Wednesdays from 12 p.m. to 1 p.m. Go to mvfsc.org to learn more about Martha’s Vineyard Figure Skating Club or to sign up for programming.

ATHLETES ON: Resilience and bouncing back from a setback | Lifestyles