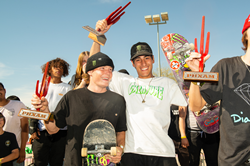 What a weekend! Monster Energy congratulates Team rider Jhancarlos Gonzalez on winning first place in Cowtown’s 2022 PHXAM Street Skateboarding Competition at Desert West Skateboard Plaza in Phoenix, Arizona this weekend. In the 20th anniversary edition of the legendary amateur contest, the 25-year-old from Bogota, Colombia took victory with a perfect run. He was joined on the podium by weekend runner-up Kieran Woolley, 18, from Minnamurra, Australia.

Hosted by skate shop Cowtown Skateboards, the annual event provides a proving ground for aspiring amateur riders with a $20,000 purse. Celebrating two decades of PHXAM, this year’s edition included the first-ever “Cash-or-Crash” Best Trick contest, a photo exhibit reminiscent of the work of photographer Joe Hammeke, as well as an After Party featuring the hip-hop artist Xavier Wulf and the premiere of the Arizona skate video MIDTONE.

Throughout the weekend, the concrete Desert West Skateboard Plaza saw intense skating by some of the best am skaters in the world. After qualifying for Sunday’s final in first place, Monster Energy’s Gonzalez thrilled the crowd (and the judges) with a perfect final run, stacking up tough tricks well past the buzzer.

In the “Cash-or-Crash” Best Trick contest, Woolley got the crowd going with a parallel-footed grind on the rainbow rail that has to be seen to be believed. Also boasting Best Trick money, Monster Army pilot Liam Pace showcased his larger-than-life transition skating skills, including a shove-it noseslide into the corner of the pool and a twist at high speed on the rainbow rail.

In Saturday’s qualifying, Monster Energy’s Brazilian Filipe Mota clinched a golden ticket straight to the final by displaying flawless technical moves throughout the course. Highlights for the 15-year-old included the frontside boardslide big spin and the frontside board slide the rail kickflip, the frontside noseslide fakie and the noseslide to crooks the Hubba, the backside lipslide the big rail and the backside tailslide kickflip the big Hubba. Mota finished PHXAM 2022 in tenth place.

In case you missed this weekend’s live webcast of PHX AM 2022, you can watch a full replay on YouTube.

Based in Corona, California, Monster Energy is the leading distributor of energy drinks and alternative beverages. Refusing to recognize the traditional, Monster Energy supports the scene and the sport. Whether it’s motocross, off-road, NASCAR, MMA, BMX, surfing, snowboarding, skiing, skateboarding or the rock and roll lifestyle, Monster Energy is a brand that believes in the authenticity and at the heart of what its sports, athletes and musicians represent. More than a drink, it’s the way of life lived by athletes, sportspeople, bands, believers and fans. Learn more about Monster Energy, including all of its beverages, at http://www.monsterenergy.com.

Share the article on social networks or by e-mail: