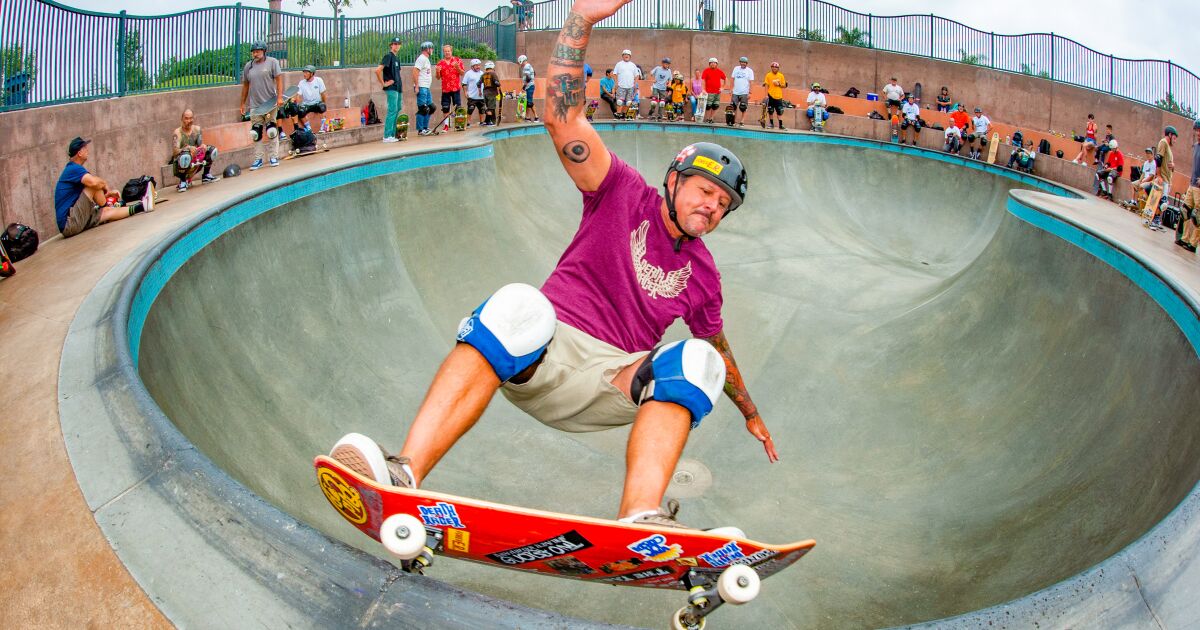 In any skatepark around San Diego on any given day, it’s a challenge to find someone who grew up skating on steel or dirt wheels.

But at Linda Vista Skateboard Park in September during the heat wave, there were dozens who did and fondly remembered the invention of urethane wheels in the early 1970s.

Urethane wheels are a game changer. They transformed skateboarding from a fun pastime invented by California surfers in the 1950s into a serious professional sport that reached the Olympics in 2021.

These skaters don’t recite a history book. They lived it. Now in their 50s and 60s, they are trailblazers who grew up in Southern California alongside the sport. They call their band Deathracer413, a nod to staying young and moving past the inevitable.

Doug Marker, a 61-year-old former San Diego pro, started the group in 2020 with the goal of skating at every park in the area. What started as a few weekend traveling buddies has grown into a 50-person club that includes aspiring ex-professional skaters, amateurs, a few women, the occasional child, and even a legally blind member. (He tears up.)

On October 15, they will reach a milestone – their 100th road show, which they will celebrate at Encinitas Skate Plaza aka Poods Park.

“Deathracer’s tagline is ‘One step forward, one step from death,'” Marker said on the San Diego News Fix podcast in August. “It’s all coming down to us and we’re all going to have our day, but we’re going to keep pushing forward and staying ahead, and having as much fun as possible.”

Blasting punk rock, smashing beers and jumping into swimming pools every Saturday is now a tradition. Sure, it can be dangerous – member John Uhl listed injuries: hypertensive knee, blown shoulder, blown ankle, bad wrists – but that’s what makes it fun.

“I have friends who are 65, and they still ride at a high level,” Marker said. “Don’t think we’re just driving past our house on the sidewalk. We fall into 11 foot pools, we’re still maneuvering and doing things. A lot of young kids are amazed at the level of skating we do.

Plus, it makes them feel young themselves.

Jeff Voegeli, better known as ‘Mogs’ for his love of skateboarding bumps, is 65 and got his start at Carlsbad Skate Park, which opened in 1976 and is the second oldest in the world after Surf City in Tucson, Arizona. He said these encounters made him feel like he was 6 years old again. David Skinner, 58, described the group as “a bunch of fifth graders with credit cards” to buy whatever gear they want.

Somehow, they said, skateboarding is even better now that they’re older.

“When we were kids it was all about competition, who was better than everyone else,” said 58-year-old Tommy Weatherby. “Now everyone is pushing everyone else and it’s just… more liberating. It’s just awesome. There’s no pressure. There’s no competition. Everyone just wants enjoy.

Deathracer vice president Stevy Trudeau, 57, agrees. “Now it’s really more about the brotherhood and the camaraderie that we all have together,” he said.

Hilary Kaehler is 43, one of the youngest in the group and also one of the only women. “I was looking for a group of people, non-judgmental and just fun, easy going, and these were the guys who let me in and showed me some love and cheered me on,” he said. she declared. “They’re just a great group of people.”

Although fun is a top priority, belonging to the group has meant much more to some.

Skinner, who survived stage 4 throat cancer, calls Deathracer a lifesaver. Primo, who goes by a nickname and grew up in Venice Beach with the legendary Dogtown crew, says the band helped him change his lifestyle for the better. They accepted an “LA guy” no questions asked, he said.

And that’s kind of the point. That’s a huge appeal of skateboarding: the community. They skate every Saturday, but they also bond by sharing stories and challenges.

“Skateboarders are all like family,” said Chris Boggeln, 50, who got back into skateboarding five years ago after realizing there was something missing in this life. “It doesn’t matter what color you are, what gender you are, it doesn’t matter. If you ride four wheels, you’re part of the family.

Lifelong surfer, skateboarder and photographer Lance Smith echoed that sentiment. “Wherever you go is a brotherhood,” he said. “You can go skate in Arizona or Oklahoma or go back east to the East Coast, and they’ll all welcome you with open arms because you’re a skater.”

Over the course of his life, Smith, 72, has seen the sport grow in form and style, from races and pools to freestyle, street and slalom. He saw it fade and almost die out in the 1980s before enjoying a big resurgence in the 90s and now attracting more talented women and young people than ever.

“I wouldn’t trade it for anything,” Smith said. “I have seen everything.”

When a skater becomes a Deathracer, Marker presents them with an envelope. Inside is a patch and a short letter that ends with “No age restrictions, no physical limitations, just willpower, passion and imagination”.

Every Saturday, the band is out there at a skate park in San Diego and lives those words.

That’s what it means to be a Deathracer.