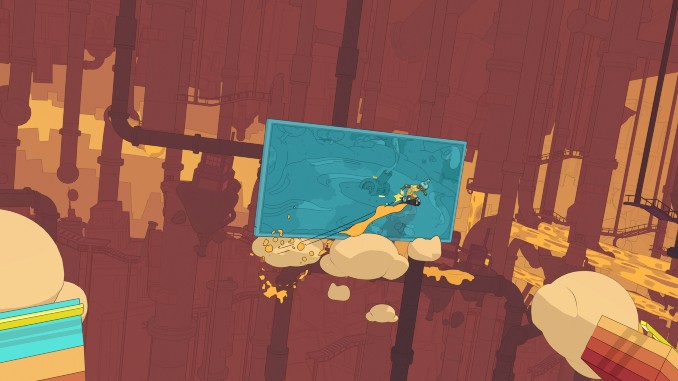 Hit the deck with OlliOlli World

I was born in 1999, just missing the golden age of skate culture, but not my next door neighbor. He was as much of a skateboarder as you could be in a rural town: those “punks” who bring their decks everywhere with them aspiring to be Tony Hawk, all while looking like a Spencers model. The one time I convinced him to let me skate, I ate him seconds after I put my foot on the board. So I turned to skate games instead. I must have spent dozens of hours Tony Hawk’s Underground; I never really progressed, but I got addicted to chaining tricks through manuals, ollies and grinds. Years later it still does, so thanks to skate godz for OlliOlli World.

Developed by London studio Roll7, OlliOlli World pushes far beyond its predecessors into the gnarly ranks of skate heaven. The game is a visual treat; vibrant colors pop across various themed foregrounds whether you’re chaining a combo or just browsing. The simplistic character designs are full of charm, effortlessly combining humans, talking lizards, and ridiculously goofy skate gods into the cohesive collage of bliss that is Radlandia. It plays as well as it looks, maybe even better, but its own ambition sometimes wavers under the weight of its conflicting level design and thankless challenges.

Radlandia is exactly as it sounds: a pure paradise for skaters by skaters. Everyone skates in one way or another across the country, but the most harmful of all are the Skate Wizards, who are chosen by the skate godz to be the middleman between the mortal skaters and the godz. Current skate assistant Chiffon is looking to retire and find a worthy successor: that’s where you come in. After passing the trial, you embark on a quest to skate around Radlandia with Chiffon and his gang to meet all five regions skate godz and reach Gnarvana.


OlliOlli World has incredibly dense character customization; you control everything from hair and glasses to truck color and tattoo designs. It cleverly bypasses the gender binary, referring to the player only with their pronouns and allowing you to thrive in that androgyny if you choose. This inclusivity speaks to his general sense of positivity and acceptance. OlliOlli World runs on good vibes and lofi beats, a welcome far removed from the punk nature that has defined the skateboarding community for so long.

The good vibes extend to the gameplay, which is simple to learn and not too difficult to master. The left stick controls all your jump and grind tricks, pressing A pumps you forward and increases speed, the triggers rotate you, you get the picture. If you happened to bail at any time in the difficult levels, a quick press of a button causes you to respawn at one of several checkpoints. Playing on the Xbox everything felt natural, at least until you start trying more complex tricks, in which case the controller can feel a little cluttered.

The whole of tricktionary is open to you from the start, so if you feel the call of skate godz, you can learn various tricks long before you learn them. Or, you can be like me and discover them by accidentally mashing buttons. I almost felt like I was cheating when I learned the manual, stringing together massive combos that earned me tens to hundreds of thousands of points. The success was amazing and my combo addiction hit me hard; every time i wasn’t playing OlliOlli Worldmy thumbs itched to get back to the controller.

Each of the six regions around Radlandia is filled to the brim with levels and challenges, often requiring players to not only reach the finish line, but also pick up certain tricks along the way, or tap out five of your friends , or even beat the level without grinding once. There are even special challenge levels with harder tracks or one-off missions to change the pace. I was determined to conquer them all. Before I could progress to the next level, I would make sure that all the elements were taken care of: I beat the level, then beat it again without checkpoints, I had completed all three challenges and dominated the high score. Rinse, repeat. Sure, ticking all those boxes rewards you with new customization options and tracks, but I never cared – I was in it for the glory.

It’s there that OlliOlli World goes from a cold good time to a terrible nightmare. Levels, which at first are simple stages to demonstrate your tricks, turn into increasingly longer challenges of endurance and reaction speed. Some levels, especially in the desert area of ​​Burnt Rock, become maze-like puzzle boxes that require intense planning and painful precision to fully beat. Jumps go from short jumps to giant cracks, often requiring ridiculously specific timing that’s counterintuitive to the game’s innate sense of speed.

The more I progressed, the less in control I felt. Challenges start requiring you to beat the level in a combo, matching dangerous terrain with exact button presses. Even local heroes, the non-playable characters whose high scores you battle, become unmistakable as their scores soar into the millions. Many local heroes are hard to beat in the second world, which makes me wonder if those who don’t learn tricks themselves early actually win. In this way, the design of OlliOlli World doesn’t just encourage you to look ahead and try new things well ahead of schedule – it practically requires it.

My vibrations have been tarnished. Where I used to spend minutes going through levels, it would now take me 10 minutes or more to beat a specific section. The lofi beats that once relaxed me became irritating, as their lack of specificity caused each song to merge into an annoying jumble. Trying to complete the challenges turned into a Herculean task that I just couldn’t bear. Unlocking cosmetics – something I rarely touched after initially designing my character – just wasn’t rewarding enough to warrant trying. The combos and tricks lost their luster and I had to put my board away.

All that to say: I really like OlliOlli World, but I don’t like the way I played it or what it’s become. It’s whimsical and relaxed, powered by vibrations and an incredibly addictive gameplay loop, until it’s not. Subsequent challenges taunt me with their specificity, their unfilled shadows a stain on my previously near-perfect record. Level design shifts from gimmicky to punishing precision; towards the end, I stopped feeling responsible for every time I died because I couldn’t tell what made a successful race from a failure.

I look forward to returning in a few weeks with a clear head and a strengthened resolve, but for now I need a vacation from Radlandia. I went from feeling miles ahead of the curve to sliding my wheels under me and wiping hard on concrete. Honestly, there might not be anything more skater than that.


OlliOlli World was developed by Roll7 and published by Private Division. Our review is based on the Xbox Series X version. It is also available for Xbox One, PlayStation 4, PlayStation 5, Switch, and PC.


Mik Deitz is a freelance writer and intern at Paste. They inhale stories from video games, movies, TV, and books, and never finished God of War (2018). Shout or compliment them on Twitter @dietdeitz.