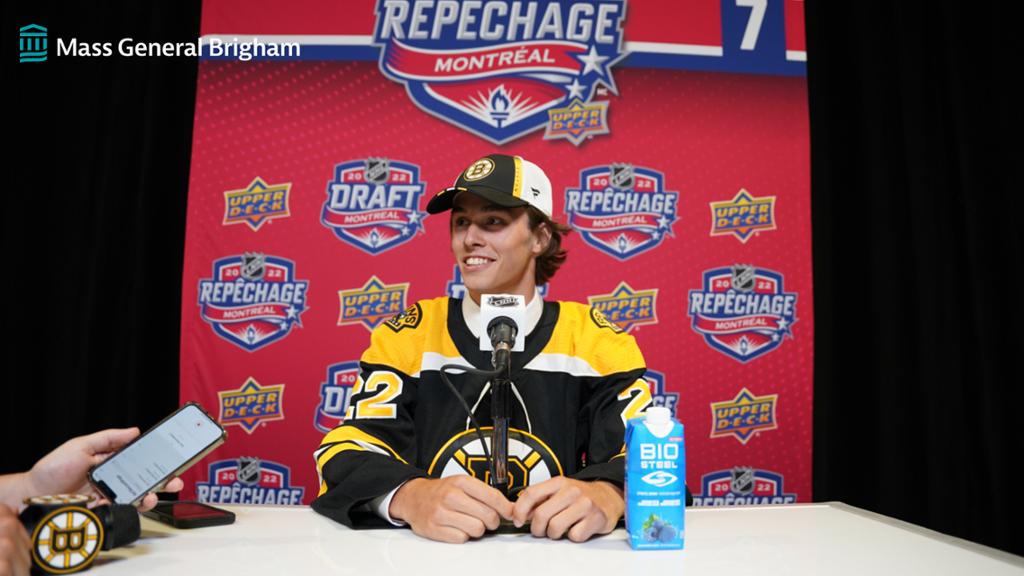 Getting to know: Frédéric Brunet

BostonBruins.com – The Boston Bruins selected defenseman Frederic Brunet with the 132nd overall pick Friday afternoon in the fifth round of the 2022 NHL Draft in Montreal.

The Bruins may have been in enemy territory in Montreal. But Brunet felt at home.

“Hearing my name by the Boston Bruins in the stands with my family and all my close friends and everything is a great feeling,” said Brunet, who grew up just hours from the Bell Center. “I couldn’t describe it, but an amazing feeling and I’m so happy to be a part of it.”

Brunet spent his last year with the Rimouski Oceanic of the QMJHL, registering 12 goals and 34 assists for 46 points in 63 games. Brunet also had a strong run in the playoffs, playing in nine games while recording three assists and four penalty minutes.

“Very good for me this year – not for points, but my game has just improved and I’m happy with that,” Brunet said. “The Oceanic organization is an awesome organization that I wouldn’t be here without and it’s so awesome to have this result and step in the door for the NHL.”

When asked what he hopes to work on, defense tops the list. “I worked a lot this year with my defensive coach and my coaches to work on being a little more reliable and two-way on the ice,” said Brunet. “Especially on pucks on the outside, in 1-on-1 battles.”

As for his attacking game, it’s something he’s always trying to improve, but not something that’s a pressing concern. “I’m always improving on this part of my game, to one day take the next step,” he said. “Maybe in a few years.”

Ryan Nadeau, director of amateur scouting for the Bruins, said he was impressed with the blue liner’s recent upgrades.

“Frederic is a a player we’ve been following for a little while, he’s made a big leap in terms of production year over year,” said Nadeau. “We really liked what he was doing this year and his game has improved throughout the season. We think he’s added a few more defensive layers to his game, as well as a puck-moving kid with good frame. »

“You don’t want to overvalue him – at the end of the day, we choose him, not his family members,” Nadeau acknowledged. “But I think growing up in a competitive household like that, with a brother [Cedric] who is trying to be an Olympic speed skater and his dad [Michel] to be an Olympian [for Canada in figure skating at the 1998 Winter Olympics]his uncle [Dominick] to be an Olympian [in freestyle skiing] – you just grew up in a household that is also competitive all the time and you are around her.

“The driving force behind that is what we’ve seen in the player on the ice and in growth. So when you add that into the mix, it’s probably more of a better story than it’s fully considered. , but you can see in the way his game has grown, there’s a competitiveness and a drive to succeed, and it can’t hurt to come from a family that way.

While living in Quebec this offseason, Brunet trained with a company familiar enough to Bruins fans.

“[Patrice] Bergeron and I train at Laval University in Quebec, there is a gym there. We train there, like a lot of hockey players. It’s a small group, there’s a few NHL guys and a lot of QMJHL players and everything,” Brunet said.

Brunet admitted to being a little shy when he first saw the captain, saying, “I was shy to talk to him because he’s a big deal in the NHL.

But Bergy being Bergy, of course, Brunet was able to pick up some solid advice.

Brunet plans to reconnect with Bergeron when he returns to training, this time with an easy conversation starter in his back pocket.

Free, inexpensive and fun ways to stay cool this summer in Naples