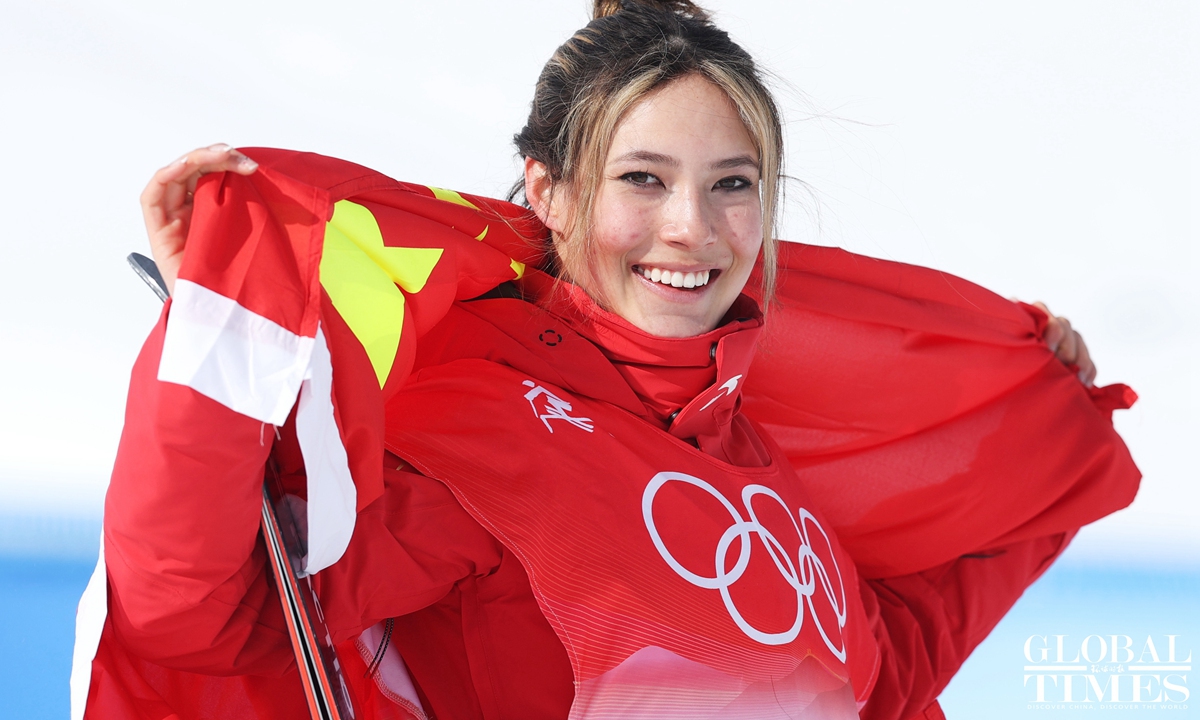 Chinese freestyle skiing Olympic champion Gu Ailing (Eileen Gu) announced at the TIME100 summit on Tuesday that she will serve as an ambassador for the US bid to host the 2030 or 2034 Winter Olympics in Salt Lake City, Utah, a move hailed by many. Chinese netizens, who said this was not just another display of world-class athletes from the Chinese delegation, but also another step for Gu to promote the sport she loves, like she always said she wanted to do.

“I think it’s this great example of globalism and the ability that we can use skiing and we can use sport and we can use winter sports to connect people,” she told the TIME’s senior sports correspondent Sean Gregory in New York during the summit.

“Salt Lake specifically wants to be a global destination for athletes from all over the world to come and train, and they want to get 15 new countries into the Winter Olympics. I think that’s a really beautiful thing and I’ve always stood for that and so I’m really honored to be a part of all of that,” Gu said.

Gu, 18, said she has no regrets representing China at the Beijing Winter Olympics in 2022, where she became the first extreme sports athlete to win three medals, including two gold, at a single Olympics earlier this year.

Gu’s news sparked heated discussion on China’s Sina Weibo Twitter, with the hashtag having been viewed more than 150 million times within hours.

“This is just the latest example of an athlete from the Chinese delegation becoming an ambassador for a foreign country’s bid to host the Olympic Games, and it’s another demonstration of the influence of these world-class athletes. “, many netizens commented, sending warm congratulations to Gu.

“Awesome! She did what she said she would do: promote skiing to the world!” says another.

Many American media outlets, when reporting on this event, focused on “gaps” among Chinese netizens and claimed that his decision would reduce his popularity among Chinese people.

Yet many netizens believe it is the American media that is projecting growing extreme nationalism onto Chinese society. These netizens said that Gu’s hope and efforts to establish communication between China and the United States should be encouraged.

Many Chinese netizens said they don’t buy the words and deeds that try to hijack the sport with geopolitics.

In 2019, Gu, whose mother is from Beijing, announced on her Instagram at age 15 that she would compete for China in the 2022 Winter Olympics.

She said the move was an opportunity for her to “inspire millions of young people” in the country where her mother was born and “to unite people, promote common understanding, create communication and forge relationships. friendships between nations”.

Gu was criticized by some US media for the move. For example, Fox News host Will Cain called her an “ungrateful” traitor, saying it is “shameful” for the young athlete to turn her back on the United States in exchange for money.

Gu shook the Chinese community after winning his first Winter Olympics gold medal in the big air freestyle event. She won two gold medals and one silver at the Beijing Games.

Gu was the most talked about athlete on Chinese social media platforms during the Winter Games, not only because of his early decision to represent China and his remarkable talent, but also for his energy and enthusiasm. unwavering for skiing. She has inspired many young Chinese people, who have said that Gu is a global idol who represents true sportsmanship.

Besides Gu, there are also examples of Chinese athletes who have taken on the same role, including Olympic diver and member of the International Swimming Hall of Fame Gao Min, who was invited as Asia’s special representative. when New York City offered to host the 2012 Summer Olympics and China’s top snooker player Ding Junhui, who was an ambassador when London bid to host the 2012 Summer Olympics.

China’s former world figure skating champion Chen Lu has also been named ambassador for Sochi, one of the candidate cities for the 2014 Winter Olympics. Meanwhile, Michael Te Pei Chang, a former professional tennis player of the United States, also served as a Goodwill Ambassador for the Beijing 2008 Olympic Bid Committee.

Destino: Gay Musicians Should Be Celebrated Outside of Pride Month