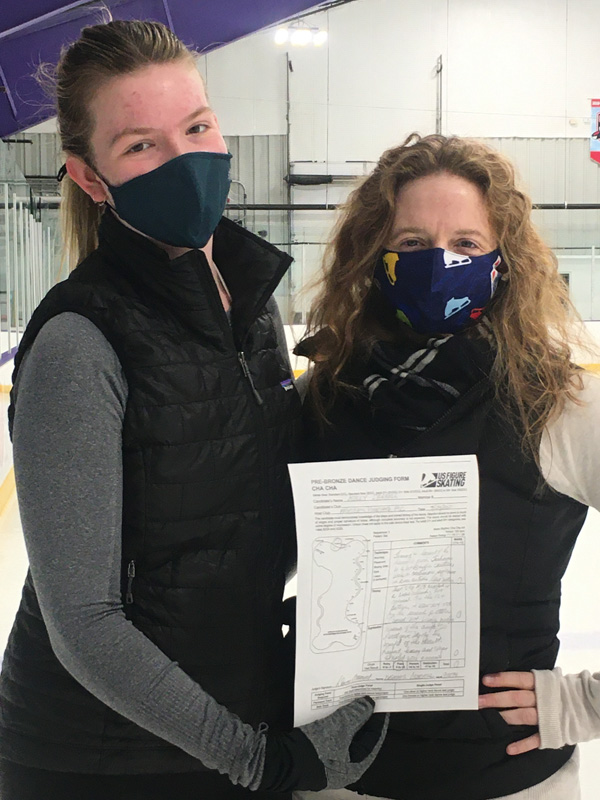 Two college skaters from Martha’s Vineyard Figure Skating Club ended their summer on the ice on a high note.

Sally Caron, a junior at Fairfield University and 2019 MVRHS graduate, passed her Junior Ladies Freestyle test. The junior level is the penultimate test in all skating disciplines offered by US Figure Skating (USFS). To become a Junior Lady, Caron landed five different double jumps and performed three different spins, as well as a complex footwork step sequence in a 3 minute and 30 second choreographed program.

Caron chose to skate on selections from the movie “La La Land”. Caron is already a USFS gold medalist in Moves in the Field (2018) and Solo Free Dance (2019).

“She hopes to win her third gold medal before graduating from Fairfield in 2023,” coach Jane Elizabeth Taylor wrote in a press release.

Caron told The Times that she chose the music from “La La Land” that Ashley Wagner, one of her favorite figure skaters, skated on in 2019.

“The training for that has been a lot,” said Caron. “But towards the end of the summer, everything clicked.”

Molly Carroll, a sophomore at the University of Denver and a 2020 MVRHS graduate, pulled off her first pre-bronze solo ice dance.

“Molly is the pioneer of ice dancing at the MV Ice Arena, this is the fourth ice dance she has done. Her dance test involved a defined pattern and steps to a specific musical rhythm that had to be practiced repeatedly, ”Taylor wrote in the release.

The music she skated on was the Cha-Cha, and the judges celebrated her strong knee flexion, personality and flair on the ice. Carroll is a member of the DU college figure skating team, and she looks forward to competing in intercollegiate competitions this school year, as well as completing her pre-bronze ice dances this winter. Carroll could not immediately be reached for comment.

How to ice skate at the Kraken Community Iceplex in Seattle