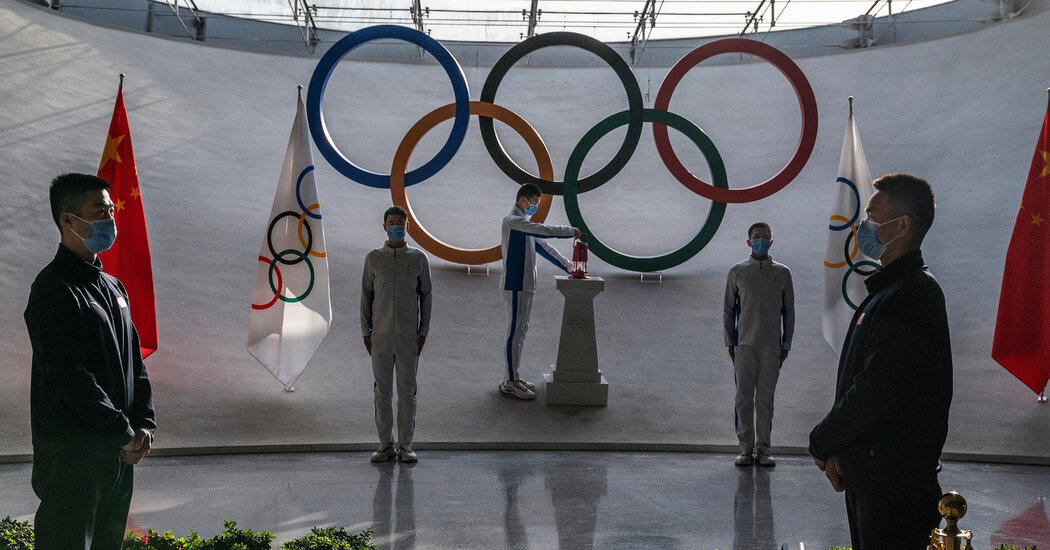 The 2022 Beijing Winter Olympics are fast approaching, with all kinds of questions – about international politics, public health and, yes, even sport – looming over them.

So here’s what we know so far.

When are the Beijing Olympics?

The opening ceremony is scheduled for February 4, a Friday, although some preliminary events will take place on the preceding days. The closing ceremony is February 20, a Sunday. In all there will be 19 days of competition across 15 sports.

This year’s Paralympic Games, also based in Beijing, are scheduled for March 4-13.

Is there a chance that the Games will be delayed or even canceled because of the pandemic?

Anything is possible, but the International Olympic Committee and the Olympic organizers in Beijing have done everything possible to emphasize that the Games will go as planned. When asked in early December if he could consider a situation in which the Games should be postponed, Juan Antonio Samaranch, a senior Olympic official, was outspoken. “The answer is no,” he said. “In a world of Covid you have to be flexible and you have to be able to adapt quickly to changing conditions. We have this in Beijing.

How will they cope with the coronavirus?

Protocols will be similar to those at the Tokyo Olympics last summer, but more stringent. Organizers are creating what they call a “closed loop system” – also known as the bubble – in which thousands of athletes, coaches, team officials, Olympic staff, contractors, volunteers and journalists will be confined for the duration of the Games. The bubble will include competition venues, hotels and other accommodation for athletes, media facilities and a transportation network. No one else comes in; nobody comes out.

Everyone at the Olympics will need to be vaccinated. (Medical exemptions are available, but anyone who gets one will have to quarantine themselves for 21 days, which is inconvenient before competing.) And once there, everyone will be tested every day.

Didn’t the Summer Olympics take place in Beijing in 2008? Why is China hosting other Games?

Many countries initially raised their hands to host the 2022 Games. But over time, one by one, they gave up – countries like Norway, Sweden, Poland, Ukraine, Switzerland. , Germany – in many cases citing the high cost of hosting the Olympics and the lack of popular support in their country.

In the end, China and Kazakhstan were the only two remaining bidders. Beijing won by four votes. The host selection process was considered such a disaster that the IOC abandoned it. Host cities are now selected through a closed-door process.

Will countries boycott the Games?

China’s human rights record, including the abuses against Uyghur Muslims in the Xinjiang region and the crackdown on pro-democracy protests in Hong Kong, has led activists around the world to call on the countries and sponsors to boycott the Beijing Games.

Prepare for the 2022 Beijing Winter Olympics

Just a few months after Tokyo, the Olympic Games will resume in Beijing on February 4. Here’s what you need to know:

Appeals intensified in November with the disappearance from public life of Peng Shuai, a Chinese tennis player and three-time Olympian, after accusing a former senior government official of sexual assault.

But the possibility of a country outright boycotting the Beijing Olympics – that is, refusing to send its athletes to compete – seems remote. Instead, several countries, including the United States, Australia, Britain and Canada, have announced a “diplomatic boycott” of the Games, meaning their government officials will not attend any ceremonies or event.

“We will not be contributing to the Games fanfare,” White House press secretary Jen Psaki said of the decision.

What will happen if an athlete holds an event – about human rights or whatever – during the Olympics?

“It’s a hypothetical question,” said IOC spokesperson Mark Adams when asked this question in early December, noting that athletes could express their personal opinions in interviews during the Games and on events. social networks.

The IOC relaxed its rules around protests and political demonstrations ahead of the Tokyo Olympics last summer, allowing athletes to make symbolic gestures – raising their fists or kneeling, for example – in arenas ahead of their competitions . (Demonstrations at medal ceremonies are still not permitted.)

But it remains to be seen what would happen if an athlete were to criticize, say, explicitly the Chinese government during the Games. “I think we have to wait for concrete examples,” Adams said.

Will fans be allowed to attend the events?

Most likely yes, but only in a limited capacity. Although fans were excluded from venues in Tokyo last summer, organizers hope to allow at least some Chinese spectators to attend the events in Beijing. Chinese authorities have established strict rules in an attempt to limit the spread of the virus, among which spectators will be allowed to applaud but not shout.

Foreign spectators will not be allowed to enter the country.

Will the NHL players be there?

No. It was a reversal of plans announced in September that would have allowed the stars to travel to Beijing while the league was closed for three weeks.

But with growing concerns over the Omicron variant of the coronavirus, the league and its players union have pulled out of the Games and may use the weather in February to catch up with postponed NHL games.

The Olympic men’s hockey tournament will now most likely feature minor leaguers and those playing in other organizations.

How can I watch the Olympics?

As has been the case with every Olympics this century, NBC will broadcast the Games in the United States. Coverage can also be found on various company-owned cable channels, NBCOlympics.com, and Peacock, the company’s streaming service.

Eurosport will broadcast the Games in Europe, often in partnership with national broadcasters such as the BBC.

TSN, RDS and CBC will broadcast the Games in Canada and Seven Network in Australia.

A calendar of Olympic events is here.

What is the time difference with Beijing?

Beijing is 13 hours ahead of Eastern Time (you can check your timezone here).

This means that many big events will come at tough times for Americans: the women’s figure skating on February 17 ends around 9 a.m. in New York and 6 a.m. in Los Angeles, and the men’s hockey final on February 20 in Beijing. begins after 11 p.m. on February 19 in New York City.

The opening ceremony will most likely take place during prime time in Beijing, that is, in the morning in the United States.

Are there any new events?

There are seven additions to the program for the 2022 Olympics. The most fascinating of them might be the monobob, a female solo bobsleigh event.

Here are the other events making their Games debut:

What are all the sports in the Winter Olympics?

Here is more information on each of them.

How much is an Olympic medal worth?

There is no International Olympic Committee cash prize for the winners. But many national federations make payments to athletes who win medals.

Some of the bonuses are substantial: The million Singapore dollars in local currency (about $ 740,000 in the US) for a gold medal is the biggest known award. Some are more modest: an American medalist receives $ 37,500 for gold, $ 22,500 for silver and $ 15,000 for bronze. The other bonuses are non-existent, like those of the British, New Zealand and Norwegian medalists.

Many athletes then sold their medals to collectors, some citing financial hardship, others seeking to raise money for charity. The prices of old medals at auction vary a lot.

(Perhaps they’ll have a bigger presence than last year’s Tokyo Games mascots, who often seemed to be missing in battle.)

What do the Olympic rings mean?

the five rings, in blue, yellow, black, green and red, date from 1912 and were designed by the founder of the Modern Games, Pierre de Coubertin. The colors were chosen so that each flag in the world has at least one matching color.

It is not clear why there are five rings: they may represent five continents, or the five Olympic Games that had been staged when they were designed. There is no special meaning for an individual ring.

Where will the next Olympic Games take place?