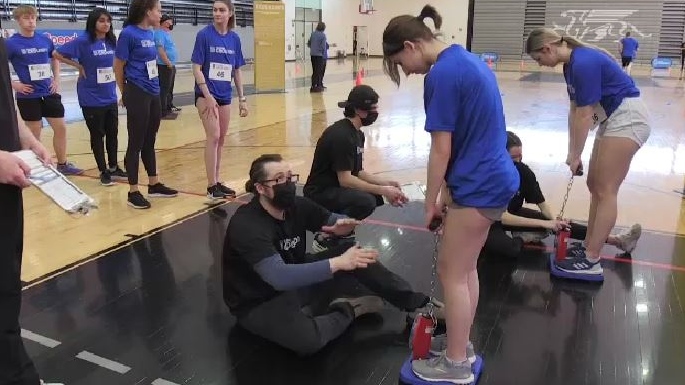 ‘An opportunity that could actually change their lives’: Olympic hopefuls test their skills in Guelph

The search is ongoing for future Canadian Olympians.

Athletes from across the country were in Guelph this weekend, hoping to take their training to the next level.

RBC Training Grounds hosted its first in-person event, after two years of virtual testing, to see if local athletes can compete at the Olympic level.

The event tests athletes’ strength, speed, power and endurance, to see if they are compatible with national sports programs that need competitors.

“I think it’s just exciting for them, it’s an opportunity that could actually change their lives,” said Mandy Bujold, former Olympic boxer from Kitchener and brand ambassador for the RBC Olympic program. “We’ve had over 13 athletes compete in the Olympics, winning eight medals.”

Those chosen for the program will receive financial assistance to compete at a higher level and may need to relocate to another province to train.

RBC Training Grounds has had notable success with Kelsey Mitchell, who attended the event as a soccer athlete before transitioning to cycling and winning a gold medal at the 2020 Summer Olympics .

“Cycling, for example, looks at the power, then they look at the beep test,” Bujold explained.

With Mitchell’s success in mind, the athletes at Sunday’s event were excited to show off their skills.

“I just wanted to see what I could do and how I could improve,” said Dominik Bahadur, a 15-year-old runner from Kitchener. “Definitely sprints — 100, 200.”

“I was looking for the Speed ​​Skating Canada folks, because I’m into short track right now,” said Connor Waters, a 17-year-old from Oakville.

“I saw the ad in the paper and thought I’d give it a try,” said Quinn Dyce, a 17-year-old from Fergus. “It sounded like a lot of fun. Rugby or wrestling would be really cool for me.”

“Right now we’re both loving rugby and really enjoying our college experience,” said Stephanie Svaikauskas, a 20-year-old from Guelph. “We’re looking forward to playing for Ontario and maybe playing for Canada one day.”

“We really want to take it to the next level and we want to see how far rugby can take us,” said Emily Clark, a 20-year-old from Mississauga.

Guelph is one of three RBC Training Grounds stops in Ontario. An event will take place in Ottawa next weekend, followed by Toronto. Any athlete between the ages of 14 and 25 who wants to test their skills can sign up to try to become an Olympian.