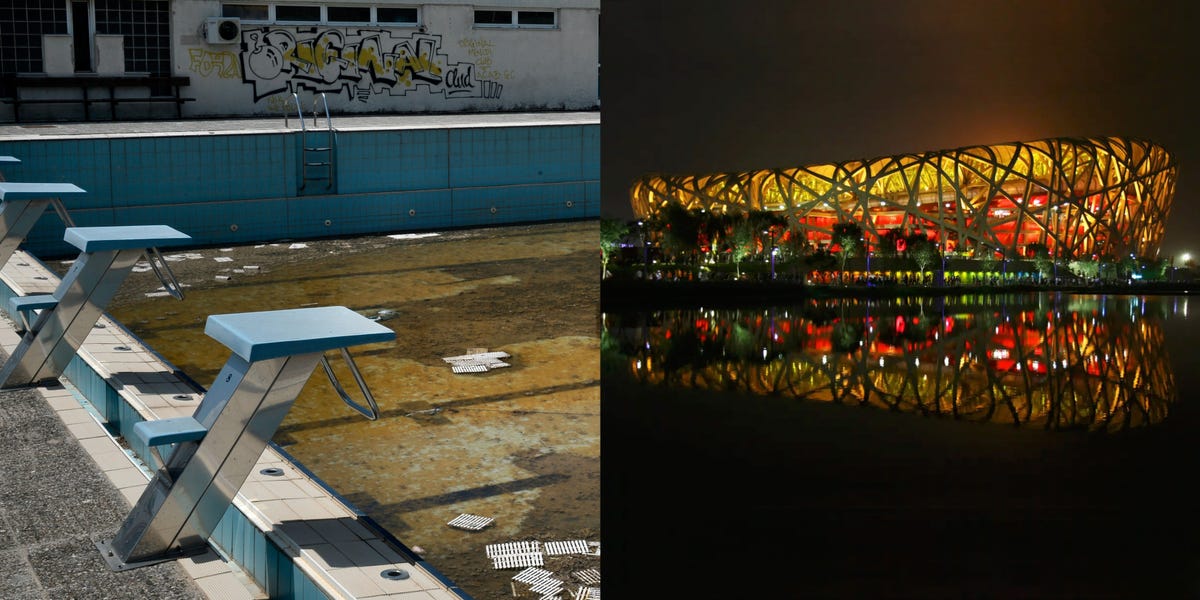 Abandoned Olympic venues can be left in the past

Every four years, an international city gets two weeks to shine as it wastes billions of dollars and acres of land to erect grand, brand-new venues for a global cast of avid athletes. As host of this year’s Winter Games, Beijing became the first city to host both Winter and Summer Olympics.

This has become an opportunity for the Chinese capital – both out of concern for the environment and out of necessity – to showcase more climate-friendly urban design. It also hints at what our future might look like.

This year, several of the Olympic venues were redeveloped from existing buildings rather than built from scratch. The Beijing Winter Olympics opened at the same Bird’s Nest venue that opened the 2008 Summer Olympics, while another venue, the Big Air Shougang Ramp for big air events , received mixed reactions from athletes and viewers around the world.

At first glance, western Beijing looked like an unlikely place for a ski jump usually placed in the middle of snow-capped mountains. Instead, a 61 meter high and 164 meter long ramp was built on what was once a steelworks. Remnants of the industrial site pierced the backdrop as skiers launched themselves into the air amid gray smokestacks.

Some viewers called it dystopian, but the industrial background was all the interest. Industrial marks, now reallocated to non-industrial use, represented the city’s history. In addition to Big Air Shougang, two coal workshops have also been transformed for figure skating, short track speed skating, curling and ice hockey.

The Olympics and the the future of urban planning

This reassignment of former industrial power stations raises questions about the future of sustainable urban planning. The Economist journalist Simon Rabinovitch tweeted: “To see the Shougang Steel Mill, once Beijing’s biggest source of pollution, transformed into a sports park without erasing its industrial heritage is actually quite impressive.”

HY Councilor William Chan, a Sydney architect and urban planner who has worked on previous Olympic venues and design teams, defines heritage in the context of architecture as a lived experience.

“Heritage is not about putting architecture behind glass,” Chan told Insider. “Heritage is preserved when used by future generations. Much of the stories we value are lived stories.”

American freestyle skier Alex Hall also spoke about Big Air Shougang’s post-industrial aesthetic, telling The Associated Press, “The crazy chimney things in the back are pretty cool…You can see some of the mountains in the background, you have this temple here, the city is over there.”

Of course, climate change was not solved with a simple restructuring of a post-industrial steelworks. A converted steelworks does not mean that steel production has stopped; others still operate in different parts of the country.

Additionally, while the Beijing Organizing Committee touts the Big Air Shougang as a brand of sustainable redevelopment, the artificial snow it generated for the Games required significant amounts of water and electricity. (Marie Sallois, director of sustainability for the International Olympic Committee, told Insider that Beijing uses ice coolers to make artificial snow, which are “much more climate-friendly than other ice-making methods.”)

A a step in the right direction for urban planning

While Beijing – and the rest of the world – still has a long way to go, Sallois was pleasantly surprised by Beijing’s initial proposal to rebuild the Shougang Industrial Park.

“It met two key objectives [for the International Olympic Committee]”, she told Insider. “This allowed the Games to act as a catalyst for sustainability in the host city, and organizers maximized existing venues, building only when absolutely necessary. “

Chan also highlighted the importance of social sustainability in urban planning, saying that building spaces that respect people’s livelihoods, livability and well-being is just as important as building spaces. green and carbon neutral. It also ensures that the space will have flexible uses that can accommodate a growing urban population.

But what really makes a building “sustainable”? Chan raised the issue of the carbon footprint of a construction project.

“When we’re talking about renovations and changes to accommodate those short-term localized events or those long-term aspirations, everything has to be designed from the start of the project to have that flexibility in mind,” Chan said.

This means looking at embodied carbon: the building material, the energy expended to extract and transport it, and then the building itself. It is essential to look at the carbon footprint in order to be truly less carbon intensive with building transformations, even if it is a “reuse and recycle” project.

Chan cautioned against the lofty dreams of Olympic venues, especially given their history of abandonment.

“We must pay attention to the example of Shougang, because what happens to this place now?” Chan said. “Architecture should last for many lifetimes.” The fleeting life cycle of buildings has become a problem in all modern cities due to what he called a new culture of “disposable architecture”, or buildings created for one use only – such as an Olympic event.

The International Olympic Committee’s sustainability team is aware of the criticism against its abandoned sites. In recent years, the Committee has asked all host cities to propose heritage uses for their sites – and Beijing is no exception.

Big Air Shougang was built with the intention of a life beyond the Olympics, becoming the first permanent big air venue in Olympic history. Sallois explained that the previously underused and underdeveloped park will serve as a recreational sports area for residents to enjoy snow sports and other activities. Sallois hopes that Shougang “will bring a trend of large urban neighborhoods”.

The Olympic Committee hopes to change its unsustainable reputation, including by building fewer brand new venues

Sallois told Insider that in Paris, the host of the 2024 Summer Games, only 5% of venues will be newly built, including the Olympic stage and the aquatics centre. The city will also rebuild an underdeveloped neighborhood like Shougang to help improve the urban environment for the local community.

Milan, host of the 2026 Winter Games, “will also rely on 93% of existing, renovated or upgraded infrastructure”, said Sallois, and Los Angeles, host of the 2028 Summer Games, will have a ” even more radical reuse, because no new places will be built.” (This would mark the LA Coliseum’s third Olympics.)

Big Air Shougang suggests the potential of some underutilized urban spaces for sustainable “renovation” offering several flexible and long-term uses for an evolving local community. In the context of sustainable urban planning projects, Chan highlighted the importance of “adaptive reuse”, a concept which establishes that “every building must respond to evolution and flexibility as people and uses evolve. “.

Industrial sites marked by time and world events are physical reminders of how our civilizations have developed, but they are also reminders of how far behind we have fallen. But the story hidden in the buildings is an essential part of the urban heritage that tells how we got here and where we can go. We can’t undo the rapid industrialization that has already happened, but we can certainly rewrite our future, even if that means building on top of it.

All sports will ‘benefit’ from returning Russian athletes, says Bolshunov